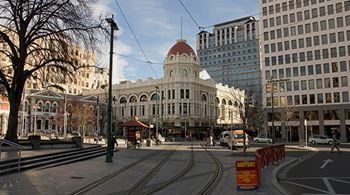 Resting upon the Avon River between the ocean and the Southern Alps, Christchurch is a relatively large city (the largest in New Zealand's South Island) with a small but diverse contemporary art scene that adapts and evolves, much like the city itself. Characterised by pockets of open green space amidst a mixture of modern and French neo-Gothic buildings, the city holds a distinct character.

Since the Canterbury College School of Art's establishment in 1882, the Garden City has historically been one of the country's main centres of art. Home to the loose but influential long-running art association known as The Group, some of New Zealand's best-known avantgarde artists over the last century studied amidst the city's unique urban landscape.

Behind its imposing curved glass façade, Christchurch Art Gallery Te Puna o Waiwhetū boasts a diverse collection of prominent historical and contemporary New Zealand artworks. Canterbury Society of Arts, established in 1880, continues to propel the city and region's artistic development, showcasing the latest talent at the Centre of Contemporary Art (CoCA). Smaller influential galleries such as the Jonathan Smart Gallery, The Physics Room, City Art Depot, and PG gallery192 strengthen the diversity of the city's art scene by providing a platform for many established and up-and-coming Canterbury artists.

Despite the disruption to this artistic legacy and Christchurch society at large caused by the 2011 earthquake, the art scene has continued to thrive. New life has been breathed into the city in the years following the natural disaster by a bustling array of street art; murals, sculpture, installations, and pop-up art spaces fill the gaps left by ruins and redevelopment. Drawn in by the abundance of blank spaces to work with, New Zealand and international artists have flocked to the city, turning it into a street art capital. The Christchurch Art Gallery (which served as an Emergency Operations Centre and Civil Defence headquarters) and CoCA both reopened five years after the earthquake. Most of the city's smaller galleries also reopened. Alongside the reopening of the City's established institutions a series of new spaces such as Art Box Gallery were established.