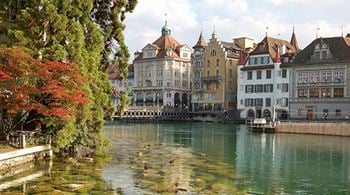 Set on Lake Lucerne, where the Swiss Alps begin, the compact medieval city of Lucerne has long been renowned for its spectacular natural surroundings, architecture and unparalleled collections of modern art. With a small but burgeoning contemporary art scene forging significant connections and spaces for innovation, the Swiss-German city is rapidly rising to rival its larger, flashier Swiss counterparts.

Once a refuge for composer Richard Wagner, Lucerne possesses historical and ongoing cultural significance. Amidst the pristine Swiss medieval and Renaissance architecture one finds art treasures of the past. Topping the list is Danish sculptor Bertel Thorvaldsen's Lion Monument (1819–1821), which honours the Swiss mercenaries killed in the 1792 storming of Paris' Tuileries Palace. Another treasure is Edouard Castres' grand circular panorama The Arrival of General Bourbaki's Army at Les Verrières (1881), installed in its Lucerne rotunda in 1889. Established as the Kunstpanorama in 1996, the Kunsthalle Luzern is based in the Bourbaki Panorama building and focused on the exhibition and discussion of local, national, and international art, and also acts as a documentation repository for Central Swiss artists.

A pinnacle art attraction housed in a neoclassical building, the Rosengart Collection (the private collection of art dealer Angela Rosengart) is a pre-eminent gallery of European modernist art. Open to the public since 2002, the collection boasts over 200 works by Impressionist and modernist masters including Monet, Cézanne, Renoir, Matisse, Picasso, Klee, Modigliani, and Dufy. Established in 1992 Galerie Urs Meile has played an integral role in the introduction and dissemination of a range of contemporary art methods and styles in Lucerne. With an outpost in Beijing, the gallery sustains a strong international connection, facilitating an exchange of art and artists between the two cities.

Moving between various locations since its establishment in 1873, the Kunstmuseum Luzern has built up a significant collection of historical and contemporary works while consistently engaging with and nurturing avantgarde art within and beyond the region. Occupying the fourth floor of Jean Nouvel's Lucerne Culture and Congress Centre (KKL) since 2000, the Kunstmuseum's exhibition programmes use the institution's historic collection as a backdrop to focus on contemporary art.

Alongside the newly established Kunstpavillon (opened in 2017), numerous smaller semi-permanent gallery spaces dot the city, including Museum im Bellpark, Galerie gummi-entli, and the KALI Gallery, providing a stage for new and up-and-coming Swiss artists from a diverse range of genres. Beyond the conventional gallery space, the LA Collection'Air sculpture park located on the territory of Château Gütsch showcases various unique sculptures and installations by several Russian artists.