Clouds of colourful pigment fall through the sky and settle, transforming the viewers' surroundings. The aftermath becomes part of the work, just as Cai's 'gunpowder paintings', singed patterns resembling traditional Chinese ink paintings, are the remnants of carefully planned explosions on canvas.

'It's my first-time using VR as an artistic medium, and I hope to destabilise the sleek and flawless aesthetics commonly associated with works created by high technology, and to explore its capacity to evoke raw emotions,' Cai said.

Beijing banned the use of fireworks inside the city's Fifth Ring Road in 2017. While the VR work does feature video of real daytime fireworks, the footage was actually shot in Liuyang, Hunan province, where China's fireworks industry originated during the Tang Dynasty (618-907 AD).

That video was then added to the VR environment along with the model of the Forbidden City, which Cai spent five months sculpting. It was realised in alabaster by the Quanzhou Xinwen Craft company in Fujian, where Cai was born in 1957.

Sleepwalking in the Forbidden City was created in partnership with HTC VIVE Arts. The VIVE is the VR headset developed by Taiwanese consumer electronics company HTC.

Odyssey and Homecoming encompasses 180 works curated by Sir Simon Schama, Columbia University Professor of History and Art History, and host of the BBC's The Power of Art.

Other works in the exhibition include early paintings and large format works such as Colour Gunpowder Drawing for City of Flowers in the Sky (2018) and Flow (Cypress) (2019).

At the opening of the exhibition, Schama quoted writer E. M. Forster's imperative, 'only connect!' 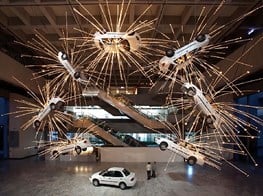 Chinese contemporary artist Cai Guo-Qiang's pyrotechnic works have been realised on paper, outdoors, and as a VR. In his often large-scale creations, Cai traces histories of human violence while investigating the potential of healing by explosion.

I tend to be relatively cautious and timid, serious and controlling, which are not very good traits for an artist.