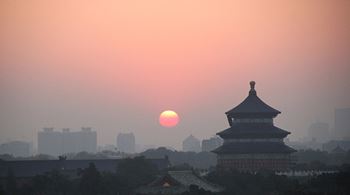 Contemporary art sprung up in many cities after China's reform and opening in 1979, but Beijing quickly emerged as the most dynamic. Pioneering exhibitions by artists and collectives such as the Stars Art Group helped establish the city's reputation for an energetic art scene that drew in artists from around the country and then collectors from abroad. Now, with the art market thriving in Shanghai, Beijing is no longer the uncontested home of Mainland Chinese contemporary art, but its galleries and museums continue to put on some of the best exhibitions in the country.

The Ullens Center for Contemporary Art (UCCA) has long anchored Beijing's art scene with important retrospectives and surveys, such as Bao Dong and Sun Dongdong's ON / OFF (2013), an authoritative overview of Chinese artists born after 1975. After the museum's original owners withdrew funding, the UCCA's future looked doubtful, but director Philip Tinari cobbled together financing to ensure it endures at the heart of the 798 Art District in the northeast of the capital.

Many more of the top galleries are located just a short drive further northeast in Caochangdi, and while some have been evicted by the state, Chambers Fine Art, INK Studio, White Space Beijing, and ShanghART Beijing still remain for the moment. The 20,000-square-metre Red Brick Art Museum—founded by Yan Shijie and Cao Mei in 2014—is also located in the northeast of the city.

Between them, 798 and Caochangdi host Gallery Weekend Beijing each March, prior to Art Basel in Hong Kong. In 2019, the Beijing Art Summit was inaugurated to supplement galleries' exhibitions with a talks programme hosted by UCCA.

Other key galleries and institutions that warrant a special trip are largely to be found in the east of the city, including Aye Gallery in Dongcheng District and the China Academy of Fine Art (CAFA) Art Museum, the Beijing Minsheng Art Museum, Vitamin Creative Space, Song Art Museum and OCAT Institute. Out west, another noteworthy nonprofit is Beijing Inside-Out Art Museum.

Among the most intriguing independent art spaces are The Bunker, which is both literally and figuratively underground, hutong storefront Arrow Factory and DRC No. 12, a scrappy little art space in a former Diplomatic Residential Compound, all of which are in Chaoyang District.

While Beijing has struggled to build an art fair to rival the likes of Art Basel in Hong Kong, JINGART—established by the co-founders of Shanghai's ART021—is starting to get some buzz after its inaugural year in 2018, filling out the calendar alongside Beijing Contemporary and Art Beijing.