Three works by Abstract Impressionist Joan Mitchell sold for a combined US $22.7 million at a Sotheby's New York auction this week.

Garden Party sold to an online bidder, briefly becoming the highest priced work Sotheby's has ever sold online before being overtaken by Jean-Michel Basquiat's Untitled (Head) (1982) later in the auction.

Despite long-time admiration from artists and collectors, and having shown alongside the likes of Jackson Pollock and Willem de Kooning since the historic Ninth Street Show in 1951, it wasn't until 2004 that a painting by Mitchell first sold at auction for over $1 million. Fast forward to 2018, however, and Blueberry (1969) sold for $16.6 million. At this year's Art Basel Online, even a work on paper, Pastel (1991), went for seven figures.

While the most expensive work Sotheby's sold on Monday night was Francis Bacon's Triptych Inspired by the Oresteia of Aeschylus (1981), which garnered $84.6 million (estimate $80 million), sales results were especially strong among female artists. In total, 25 works by 16 women were sold for a total of $86 Million, a result largely accomplished through the sale of works collected by cable TV magnate Ginny Williams.

Another significant sale came from one of Mitchell's peers, Helen Frankenthaler, whose 4-metre-wide Royal Fireworks (1975) went for $7.9 million (estimate $2/3 million), a record at auction for the artist. 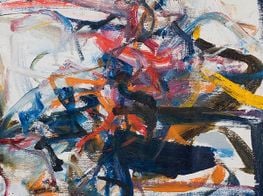 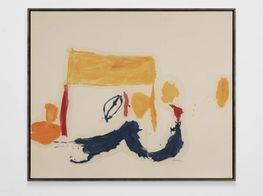 Helen Frankenthaler is recognised as one of the great American artists of the 20th century. A member of the second generation of postwar American abstract painters, her soak-stain technique, which involved allowing thinned paint to seep into the 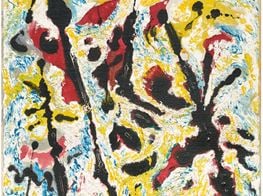 Abstract painter Jackson Pollock was one of the pioneering figures of the American post-war movement of Abstract Expressionism, and is for many an icon of 20th-century modern art. Jackson Pollock's painting practice, which consisted of dripping 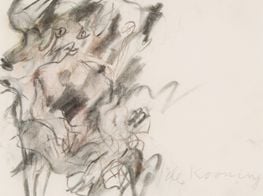 Willem de Kooning was a Dutch-American artist known for his contribution to the Abstract Expressionist movement in New York throughout the 1940s. He is recognised as one of the most important artists of the 20th century, with gestural and