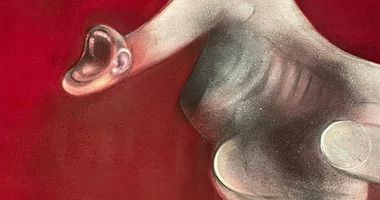 Perhaps best known for his infamously jarring series of 'Screaming Popes' made in the 1950s, Irish-born British painter Francis Bacon is a key figure of modern 20th-century painting. His acclaimed and internationally sought after abstracted figurative paintings collectively explore the anxieties of the human condition.

Born in Dublin to an English family in 1909, Bacon's childhood—spent between London and Ireland—was marred by severe asthma, from which he continued to suffer throughout his life, alongside several emotional upheavals. In 1926, Bacon arrived in London after he was ejected from the family home by his father due to his homosexuality.

Initially, Bacon worked as a furniture and interior designer in South Kengsington in the 1920s and 30s. Inspired to learn to paint and draw after seeing an exhibition of Picasso at Galerie Paul Rosenberg in Paris in 1927, by 1930 Bacon was painting in a shared studio with influential painters Jean Shepeard and Roy de Miastre.

With early backing from his monied patron-turned-lover Eric Hall, Bacon emerged in the 1940s as a central figure of the post-war Soho art scene, which included artists like Lucian Freud, John Deakin, Henrietta Moraes, and Isabel Rawsthorne. In 1948, he sold a painting to the Museum of Modern Art in New York, marking the start of an international career, which flowered in the decades to come.

For much of his life, Francis Bacon lived the socially active life of a bon vivant with a passion for gambling and drinking. Yet his myriad of expressive and often confronting paintings inspired by subjects from life and art presents the outlook of a moody, bleak existentialist.

Among his many muses were Velazquez's Portrait of Pope Innocent X (1650)—the source for his infamous 'screaming popes' of the early 1950s; late 19th-century photographer Eadweard Muybridge's studies of humans' and animals' locomotion, and, towards the late 1960s and 70s, Bacon's various friends and acquaintances. He would also produce several self-portraits.

Each of his works explores extreme psychological states reflective of the artist's own turbulent emotional state in the face of particular experiences. One can sense in Francis Bacon's art the psychological and emotional torment following the loss of his childhood nanny and longtime partner in crime Jessie Lightfoot, and lovers Peter Lacey and George Dyer.

Cementing his international reputation, the Solomon R. Guggenheim Museum in New York held a major retrospective of Francis Bacon's work in 1963. It followed the first major institutional retrospective of his work at the Tate the previous year. Ever since, the artist's work has been shown in institutions and exhibitions worldwide. In 1985, the Tate held a second retrospective of Bacon's work amidst several other significant exhibitions, including shows in Moscow in 1988 amidst the liberal atmosphere of a freshly post-communist state.

Francis Bacon's artwork has accrued numerous awards over the years, including the Carnegie Institute Award (1967)—which he refused—and the Ruben's prize, and has been the subject of countless publications.

The price, which exceeded the work's low estimate by almost eight times, was realised as the artist's exhibition opened at Victoria Miro in London.

The sum was boosted by divorcees divesting themselves of works in the Macklowe Collection and big moves from the crypto community.

Announced just in time for Halloween, the haunting image is expected to fetch around US $40 million.

The first of the 2022 Modern and Contemporary art sales opens this week at Christie's.

Francis Bacon's retrospective at the Royal Academy is nothing short of extraordinary.

The authority of Francis Bacon’s art is papal. I am not referring to the paintings inspired by Velázquez’s portrait of Pope Innocent X that made him famous. It’s just that walking into Gagosian’s imma

LONDON—In 1981, the Royal Academy of Arts in London put on an exhibition of 20 th century painting that changed the art world. A New Spirit in Painting was 'a manifesto,' the accompanying catalogu

Read More Related Press The Spirit of Painting in an Altered World 12 May 2018, Hyperallergic

'A faint, beautiful memory' is how curator Norman Rosenthal described A New Spirit Then, A New Spirit Now, 1981-2018, the current show at Almine Rech Gallery on the Upper East Side. What he’s rememb

A remarkable collection of modern western and Iranian art that had been gathering dust in the cellar of a Tehran museum and blocked from being shown in Europe has gone on display in Iran’s capital. T

From the kids who started playing candy crush the moment they slipped out the womb, to gadget-obsessed geriatrics, technology is the go to attraction of the 00s. So, for art to remain truly relevant, it needs to grow collaboratively with the technology we are all so hooked on. Cue Tate Gallery's IK Prize, an annual initiative to support...

Be among the first to know when new artworks and exhibitions by Francis Bacon are added to Ocula.
Sign Up Login