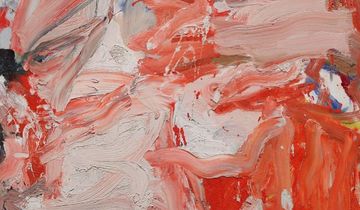 Willem de Kooning was a Dutch-American artist known for his contribution to the Abstract Expressionist movement in New York throughout the 1940s. He is recognised as one of the most important artists of the 20th century, with gestural and experimental paintings that continue to influence the art world today.

de Kooning was born in Rotterdam, Netherlands in 1904 into a destitute household. Taking an interest in the arts from a young age, he apprenticed to a prominent design firm where he was encouraged to enrol in night school at the Rotterdam Academy of Fine Arts and Techniques, now known as the Willem de Kooning Academie. During his time at the academy de Kooning studied fine and commercial arts.

De Kooning moved to the United States in 1926 after a friend helped him stow away on a ship bound for South America. After briefly working as a house painter in New Jersey, de Kooning settled in New York City in 1927, where he established himself as a commercial artist. Living in New York cemented de Kooning's interest in contemporary art, and he became friends with other artists including Arshile Gorky and Stuart Davis. In 1936 de Kooning was commissioned to design public murals by the Works Project Administration Program set up by President Franklin D. Roosevelt. Despite de Kooning's paintings never being realised for public display, his participation in the project convinced him to pursue a career as an abstract painter.

During the 1940s Willem de Kooning's focused on abstract art and the avant-garde. He worked on creating abstract paintings that rejected traditional painting styles such as Cubism and Surrealism. Together with his New York contemporaries, including Jackson Pollock and Mark Rothko, de Kooning forged new forms of painting that deconstructed symbolism through vivid colours and the visceral motions of 'action painting'.

In 1948 de Kooning was invited to display work in his first solo exhibition at Charles Egan Gallery. Here he displayed his black-and-white paintings, a series of thick oil and heavy enamel artwork that is still celebrated today.

Conceivably one of the most important paintings of the 20th century, de Kooning's Excavation (1950) awarded him the Logan Medal and Purchase Prize from the Art Institute of Chicago. The painting was exhibited at the 25th Venice Biennale in the same year and exemplifies the artist's gestural style and unusual use of space and abstract imagery.

De Kooning's 'Women' Series (1950—1953) depicts aggressively painted human figures in vivid colours. These works shocked audiences due to their frightening representation of the female figure, viewed by some as misogynistic and objectifying, and offended those who believed the work's figurative subject to be a regression from the abstract expressionist style.

Despite many perceiving de Kooning's return to figuration as a betrayal of abstract expressionism, the Museum of Modern Art in New York endorsed this change in style as an advancement in de Kooning's creative practice. In 1953, they purchased his work Woman I (1950—1952) for their permanent collection.

Interchange (1955) presents de Kooning's departure from painting the human figure to his focus on abstract urban landscapes. The painting represents a seated woman in a pink mass of hurried brush strokes: a technique de Kooning found himself influenced by in the practice of artist Franz Kline.

The Willem de Kooning Foundation website can be found here.

The Paris museum described the show as 'the first all-encompassing exhibition' of the German expressionist giant.

We offer a sneak peak of some of the exciting artworks on view at 1-54 Contemporary African Art Fair.

LONDON—In 1981, the Royal Academy of Arts in London put on an exhibition of 20 th century painting that changed the art world. A New Spirit in Painting was 'a manifesto,' the accompanying catalogu

This exhibition has been a long time coming. Aptly, it has arrived at a time when the open-mindedness and courage of expression demonstrated by these pioneers is as necessary now as ever.

Read More Related Press There hasn’t been a major group show of Abstract Expressionism in Europe since 1959 22 September 2016, Independent

In 1959, New York's Museum of Modern Art sent an exhibition to eight European cities—concluding at London's Tate gallery—with the calmly self-assured title of The New American Painting. It feature

Be among the first to know when new artworks and exhibitions by Willem de Kooning are added to Ocula.
Sign Up Login