The popular Paris museum is in dire need of refurbishment.

The Centre Pompidou in Paris will close for repair from late 2023 until 2027.

'We don't have a choice,' Serge Lasvignes, the museum's president, told French newspaper Le Figaro on Monday. 'The building is suffering.'

Required fixes include removing asbestos from the windows and façade, and a major overhaul of the building's iconic exterior. The work is projected to cost around $243 million.

The audacious design 'means that the building needs a lot of renovation,' Lasvignes told The Guardian in 2017. 'Nothing will change outside, even though we discovered that some structures, like the large funnels that were once part of the air system, are now just decorative.'

The need for the latest round of repairs was announced in September last year, with two options being considered: partial closure for seven years or full closure for three years.

French culture minister Roselyne Bachelot said that closing fully was more appealing because 'it should be shorter and a little bit less expensive.'

That should also allow the museum to reopen in time for its 50th anniversary in 2027. —[O] 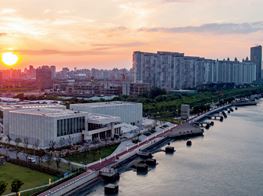 The 25,000 m² building comprises three large spaces and is located on the banks of the Huang Pu river. Designed by British architect David Chipperfield, the museum is organised around a central hall with a three-level atrium. The

The venture will occupy a Parisian townhouse when it opens in 2021.