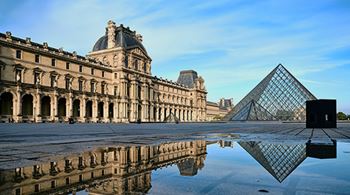 Europe's City of Light has seen major changes in its cultural scene over the last decade. International fairs, new museum and gallery spaces, and a wave of young collectors have seen Paris bolster its identity, which combines art historical depth with cutting-edge trends.

From the hip Le Marais quarter in the 4th arrondissement, to Champs-Elysées, edgy Belleville, chic Saint Germain, and the sprawling suburb of Pantin in the northeast, galleries across Paris are part of a vibrant and diverse scene, which saw the arrival of Gagosian in 2012, Los Angeles' Freedman Fitzpatrick open a second space near Hotel de Ville in 2018, and David Zwirner's arrival in 2019. Countless galleries are spread across the city, with events such as Paris Gallery Weekend—launched in 2014 by Marion Papillon—offering the opportunity to explore spaces such as Galerie Lelong & Co., Xippas Gallery, Perrotin, Galerie Templon, and In Situ – fabienne leclerc, alongside a talks and performance programme.

High quality exhibitions are present all throughout the year at spaces such as Marian Goodman Gallery, which has sought to introduce European art to American audiences for over 40 years at their New York base, with a roster of names such as Leonor Antunes, Dara Birnbaum, Nairy Baghramian, and Marcel Broodthaers. In Pantin, Galerie Thaddaeus Ropac holds its second Paris space in a 19th-century boiler factory and copper workshop just shy of 5,000m2, with past exhibitions by artists such as Georg Baselitz, Imran Qureshi, and Anselm Kiefer.

In October each year, international and French galleries participate in the city's major Foire internationale d'art contemporain (FIAC). Founded in 1974 and held at the iconic Grand Palais exhibition hall between Champs-Élysées and the Seine River, the established fair brings around 200 galleries together to showcase modern and contemporary artworks. FIAC's satellite fairs include Paris Internationale, showcasing emerging and independent art spaces, along with Asia Now, which presents artists from across Asia to a European audience.

Paris teams with blockbuster exhibitions around the year, at institutions ranging from the Louvre to the Musée Rodin, Musée Marmottan Monet, Musée National Picasso-Paris, Musée d'Art Moderne de la Ville de Paris, and the Centre Pompidou. The Palais de Tokyo, which reopened in 2012 after extensive renovations, is the largest contemporary art centre in Europe, staging around 40 exhibitions each year. Collectors such as François Pinault are invested in the city's cultural future, with his third museum—the other two being located in Venice—slated to open in June 2020 at an estimated cost of $170 million nearby the Louvre, Centre Pompidou, and foundation Cartier's new location, opening in 2024. Elsewhere, Guillaume Houzé's Rem Koolhaas-designed space in Le Marais district, Lafayette Anticipations, 'acts as a catalyser, providing artists the unique, made-to-measure conditions in which to produce, experiment and exhibit.'

From one drawing another