Thomas Demand to Build a House of Card at MOCA Toronto

A highlight of MOCA Toronto's recently announced fall programme is HOUSE OF CARD, the Thomas Demand exhibition that will run from 15 September 2022 to 8 January 2023.

Demand is known for his photographs of life-sized, incredibly lifelike cardboard models of carefully selected interiors. Past subjects have included Saddam Hussein's kitchen and the Paris tunnel where Princess Diana died.

In a 2015 conversation with Ocula Magazine, Demand said his practice combines 'a painter's and sculptor's concerns in a third medium, photography. It's a reflection upon the media sphere of images surrounding us.'

The MOCA Toronto exhibition follows his 2020 exhibition of the same name at Museum Leuven in Belgium. It highlights the similarities between Demand's projects and those by other artists and architects.

It includes the series 'Model Studies' (2011–today), in which Demand abandons his usual practice to photograph scale models made by other artists, architects, and designers, as well as a site-specific commission by British artist Martin Boyce, and contributions from architecture firm Caruso St John and Thai artist Rirkrit Tiravanija.

MOCA Toronto's Executive Director and CEO Kathleen Bartels said Demand's practice resonates in Toronto, a city that is quickly being developed, and is sometimes described as a model city in the making.

'Other research into Toronto as an "imposter city", whereby the city acts as a backdrop for a variety of cities within the film world, also interested us in presenting Thomas' work,' she said.

Bartels likens Demand's model making to use of predictive models used 'not just in the architectural or urban planning sense, but in terms of weather systems, economy, demographics, etc.'

The Toronto exhibition comes hard on the heels of The Stutter of History, a major solo show at Shanghai's UCCA Edge, which continues until 4 September.

Demand's practice of creating one-to-one simulacra of the world recalls Jorge Luis Borges' single-paragraph story 'On Exactitude in Science'. It tells of an empire so committed to creating a perfect map that its cartographers draw it at a scale of one-to-one, as big as the empire itself. Utterly useless, the map is abandoned, its tattered ruins 'inhabited by Animals and Beggars'.

In an interview with BBC Culture, Demand denied being an 'illusionist', saying instead, 'I try to reconstruct an idea of reality we might all share.' —[O] 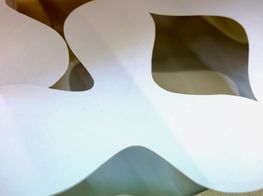 Through his photographs of life-size architectural models constructed out of paper and cardboard, Thomas Demand examines the ambiguous realm between reality and artifice. After graduating from Akademie der Bildenden Künste, Munich, in 1990, Thomas 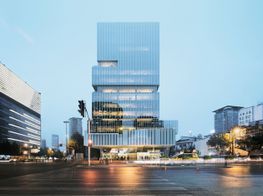