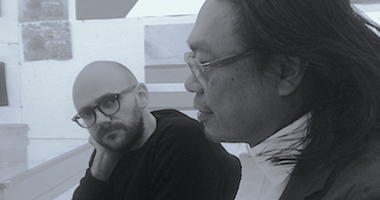 Hugo Boss Prize-winning contemporary artist Rirkrit Tiravanija is one of the foremost artists working with social interaction and activation. His communal, participatory approach and pioneering relational asesthetics have seen galleries and museums transformed into social environments.

Born in Buenos Aires, Tiravanija had an international childhood, a result of his father's diplomatic service. This nomadic life is reflected in his work in the blending together of different cultural contexts.

After time spent in Thailand and Ethiopia, Tiravanija took up his studies in Canada at the Ontario College of Art in Toronto (1980–1984), followed by the Banff Center School of Fine Arts (1984), the School of the Art Institute of Chicago (1984–1986), and the Whitney Independent Studies Program in New York (1985–1986).

People are Rirkrit Tiravanija's primary medium. As a pioneer of relational aesthetics, from the early 1990s he has orchestrated ambitious social interactions that defy typical art classification and rely on visitors for their activation. He also addresses social interactions and injustices through film and text-based works.

Concerned with human engagement in real time and transcending conventional gallery and museum conduct, his communal series 'Untitled 1990 (Pad Thai)' (1990), first staged at Paula Allen Gallery, New York, was more a social-leisure event than an exhibition. Eschewing an object-based approach and deconstructing art practices, Tiravanija transformed the gallery into a kitchen, from where he cooked and served vast quantities of Thailand's popular Pad Thai noodle dish to visitors.

Tomorrow Can Shut Up and Go Away

Tiravanija's upending of institutional space and involving the audience in his process has been elaborated over the years. In Untitled, 1999 (tomorrow can shut up and go away) (1999), for example, Tiravanija invited visitors to drink tea together and hang out in a replica of his three-room East Village apartment. This fully functioning domestic space was reconstructed at full scale in the Serpentine Gallery, London for his solo show Retrospective (2005), where people were encouraged to use it as if it were their own apartment—cooking, eating, and sleeping in the space.

It is Tiravanija's skepticism about institutional structures that characterises his practice and has led him to work with propaganda slogans. Looking to this apparatus and to the abstract powers that are at play in society, he produces text drawings overlaid on pages of newspaper like untitled 2017 (fear eats the soul/saturday, january 21, 2017) (2017).

Community action and fostering engagement is never far from his work, as seen in Tiravanija's creation of The Land Foundation with Kamin Lertchaiprasert. This shared plot of land in Sanpatong, Thailand is used for development initiatives including cultivating rice and channeling solar power with input from local and international artists, including Tobias Rehberger and Superflex.

In 2017, Tiravanija was selected to create a flag for Creative Time's 'Pledges of Allegiance' public art commission. Each flag, out 16 raised across the U.S., was intended to convey art's capacity to mobilise political change by engaging with issues the artists are passionate about.

The message of Tiravanija's flag Untitled 2017 (Fear Eats The Soul) (White Flag), which decorated the roof of the Arts Council of Princeton's Paul Robeson Center for the Arts, is tied to its allusion to German filmmaker Rainer Werner Fassbinder's Ali: Fear Eats the Soul. The film explores themes of xenophobia and racism.

Concurrent to his practice, Tiravanija works as a professor at Columbia University School of the Arts and has received numerous awards, including the National Endowment for the Arts Visual Artist Fellowship (1994), the Lucelia Artist Award from the Smithsonian American Art Museum (2003),the Hugo Boss Prize from the Solomon R. Guggenheim Museum in New York (2004), and the Silpathorn Award from Thailand's Ministry of Culture (2017).

Last month, a new sake bar opened at London's Institute of Contemporary Arts: a softly lit tunnel of booze that promises the kind of entrancing conversation one can never quite remember the next morni

Developed by the Singapore government in 2013 in an attempt to create hype around the fair Art Stage Singapore, Singapore Art Week (SAW) is a loose collection of events organized by museums, art space

Sign up to be notified when new artworks and exhibitions by Rirkrit Tiravanija are added to Ocula.
Sign Up Login