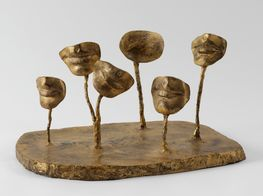 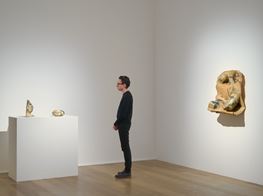 In 1962, Alina Szapocznikow cast her leg in plaster: a defining moment positioning the artist's body—and industrial materials—at the heart of a sculptural practice that, until then, erred towards the classically figurative. In To Exalt the Ephemeral: Alina Szapocznikow, 1962–1972 at Hauser & Wirth in London (7 February–2 May 2020), Noga (Leg) lies on a white plinth encased by a vitrine, like a specimen from which to depart.

The exhibition, Szapocznikow's first solo presentation in the U.K. since The Hepworth Wakefield's survey in 2017, proceeds to demonstrate the potent and playful experimentation that would follow this symbolic dismemberment. In one room, a series of lamps made between 1966 and 1971 line a low shelf, each with coloured polyester resin casts and models of various bodily features for shades, from the lower half of the face, focusing on the lips, to single round breasts, each emerging from long, sometimes serpentine stems. These are confident and witty pieces—Louise Bourgeois, a friend with whom Szapocznikow swapped works, apparently kept two such lamps in her bedroom. They connect with sculptures, not on show, whose feminist critiques are more overt; The Bachelor's Ashtray (1972), a bust of a woman's head sliced below the nose to make an ashtray, being one.

There is a palpable energy in the constellation of works that chart the final years of the artist's life; an imprint, or afterimage, of her engaged and interrogative presence. A 1971 photographic series consisting of 20 silver gelatin black and white shots of chewed gum positioned against black or grayscale backgrounds, often on stony surfaces, are at once a challenge to the formalist rigidity of the academy, and a joyful celebration of art's omnipresence in daily life.

In a note by the artist placed next to these so-called 'Photosculptures', she writes about how these 'masticated creations' were made as she polished a Rolls-Royce made from pink Portuguese marble—a mini-version of a monumental sculpture intended for Documenta V that was never realised. 'I sat in the sun and daydreamed as I mechanically chewed a bit of gum', she wrote, realising that 'an extraordinary collection of abstract sculptures was moving between my teeth'. All that needed to be done 'to achieve a sculptural presence' was to photograph them. 'Chew well, then. Look around you', she implores the reader: 'Creation lies just between dreams and daily work.' 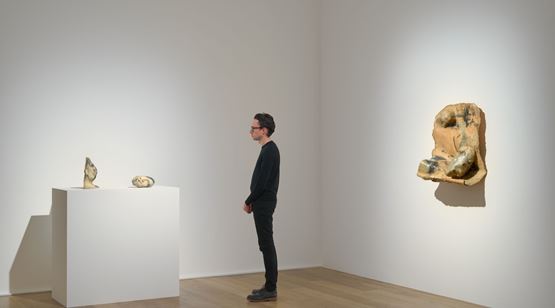 Szapocznikow's 'Photosculptures' are emblematic of the way she worked: infusing herself into sculptures that open up space between reality and the subconscious. In one group of works, three plinths contain bulbous balls of resin and gauze in small, solemn vitrines. Sans Titre (Love 1970) (1970), is the capture of a nipple, while the other two, both titled Tumeur (Tumour) and both c. 1970, seem to commemorate the cancer found in Szapocznikow's breast in 1969 to which she succumbed in 1973—in one, what looks like a pair of red lips emerge.

There is a palpable energy in the constellation of works that chart the final years of the artist's life; an imprint, or afterimage, of her engaged and interrogative presence.

In the same room, a resin wall sculpture titled Pamiątka I (Souvenir I) (1971) encases an image of the artist as a young girl on holiday, combined with the image of a Nazi death camp victim. Szapocznikow was born in Kalisz, Poland in 1926, she survived the Pabianice and then the Łódź ghettos, where she assisted in the hospital, and later internment in Auschwitz and Bergen-Belsen, where she worked in the camp hospital. After the war, she trained in classical sculpture in the studio of Josef Wagner in Prague, before studying at the École National Supérieure des Beaux-Arts, Paris, and developing a successful career in Poland, representing the country at the 1962 Venice Biennale.

Of course, Szapocznikow's personal history offers a natural frame to consider her dissected limbs—as Charlotte Higgins reflects, 'she must have seen [the human body] at its most anguished, fragile and abject during her years as a medic in the ghettos and camps'. But this reading only scratches the surface of what makes this artist's prolific body of work so captivating and historically important. 'Like many women artists who have died young or suffered unfortunate circumstances, such as Ana Mendieta or Francesca Woodman,' writes Philomena Epps, 'there is a tendency to view Szapocznikow's work through her life story, so that her sculptures and drawings become illustrations of this history.'

Her first international survey at WIELS in Brussels in 2012, which later travelled to the Hammer Museum, Los Angeles; Wexner Center for the Arts, Columbus; and Museum of Modern Art, New York—and followed the pivotal 2009 presentation Awkward Objects at the Museum of Modern Art in Warsaw that placed Szapocznikow in relation to Maria Bartuszova, Pauline Boty, Louise Bourgeois, and Eva Hesse—challenged this 'biographical determinism'. Exhibition curators Elena Filipovic and Joanna Mytkowska described a 'foreclosure of meaning' that occurred when Szapocznikow's life became too tightly bound to her work, which limited any reading of her pioneering interrogation of material and form.

While the artist is indeed constantly present in her sculptures, her presence is reflected in the way she treated the body: fragmented, separated into parts, so as to productively displace common or received perceptions and ignite a sensory and affective relationship to a material vessel that people share in common. The human body, Szapocznikow said, is the most vulnerable manifestation of the ephemeral: 'the only source of all joy, all suffering and all truth.' —[O]

In a brief but explosively inventive career, Alina Szapocznikow (1926-1973) radically re-conceptualised sculpture as a vehicle for exploring, liberating and declaring bodily experience. To Exalt the Ephemeral: Alina Szapocznikow, 1962 - 1972,

Born in the Polish city of Kalisz in 1926, the late sculptor Alina Szapocznikow is renowned for an oeuvre that renders visible the human body's experiences of love, pleasure, pain, trauma, and inevitable decay. Alina Szapocznikow's youth and early