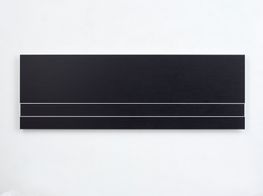 Frank Gerritz is a sculptor, but this isn’t immediately apparent from a cursory glance at his most recent work. The artist’s current exhibition at Bartha Contemporary in London, MDF (13 May – 2 July) includes pencil drawings on MDF alongside recent drawings on paper. A concurrent and related exhibition at the Sleeper Art-Space in Edinburgh (13 May – 02 July) showcases a single wall-based, four-panel, oil paint-stick on anodised aluminium work. Utilising only black, white and grey colours, the works in both exhibitions are a crisp combination of squares and rectangles and appear more concerned with the two-dimensional, than the three dimensional. The work on paper Two Centre Connection III (2013) for example, presents a white square interrupted only by a small black rectangle at its centre (the shapes are a combination of co-joined rectangles of paper). It is not surprising the critic Donald Kuspit referred to Gerritz as the ‘last abstract hardliner’.

Gerritz’s early work comprised cast iron sculptures but in the 1980s he began to create drawings that he hoped would embody ‘compressed space’, and carry the same ‘presence, indeed the same visual weight’ as his iron sculptures. The works in the London and Edinburgh exhibitions follow on from this interest. The works in London are created by building up layers of graphite, which he renders using a Faber Castell 9B pencil. He is interested in the relationship between the material and light: the way it modulates light and the way light interacts with the picture plane. The depth created by the pencil draws the viewer in, enticing them to consider the work as a three-dimensional object. The refraction and reflection of light against the graphite engages the surrounding space; one imagines the work continually evolving as the space’s light evolves, but equally as a viewer moves.

I understand that for the past two decades, you have been using an approach of applying layer upon layer of graphite pencil marks on walls, paper and, as is the case in your current exhibition at Bartha Contemporary, industrially manufactured MDF panels. How did you first come to this particular approach? Was there an epiphany moment?

I started the pencil drawings on paper in 1989. Back then, these were part of my larger sculpture installations. The drawings depicted the front, sides or top of geometric solid cast iron sculptures. 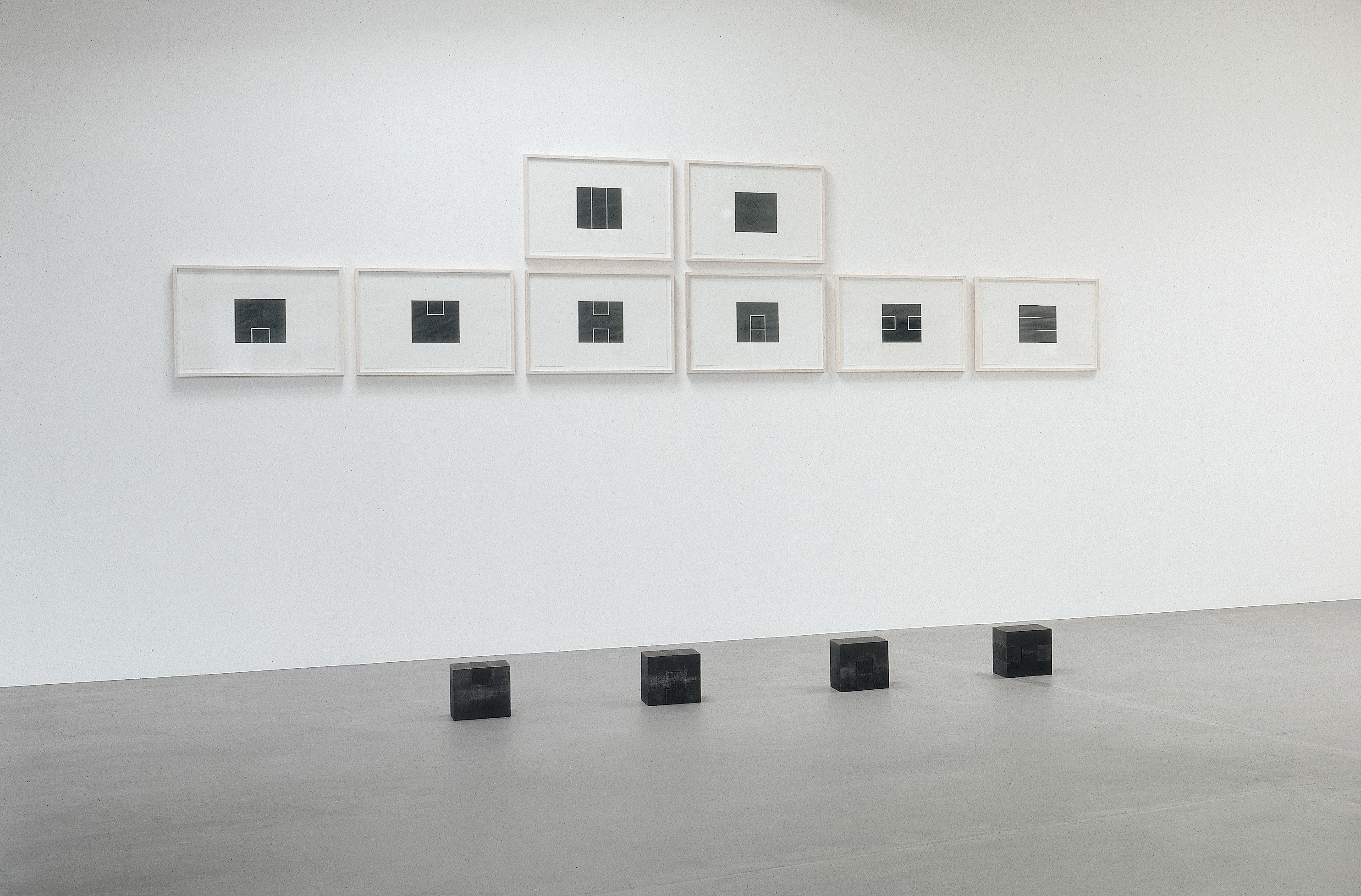 You are defined as a sculptor, but your works have the appearance of drawings. Tell me about how you view the relationship between drawing and sculpture in terms of your practice?

Back in the late 80s I was interested in creating drawings that embodied a compressed space. My intention was for these works to have the same presence, indeed the same visual weight as my heavy cast-iron sculptures; they are a means of transferring a physically compressed volume into an independent form of drawing. Always installed at head height they achieved a process in which the weight of the sculptures on the ground is elevated to your eye level.

The drawings from the very beginning were part of an installation featuring sculptures, using the same visual vocabulary they then referred to my interests concerning space, volume, the site specific and architecture. These works should always be viewed in a broader three-dimensional context. 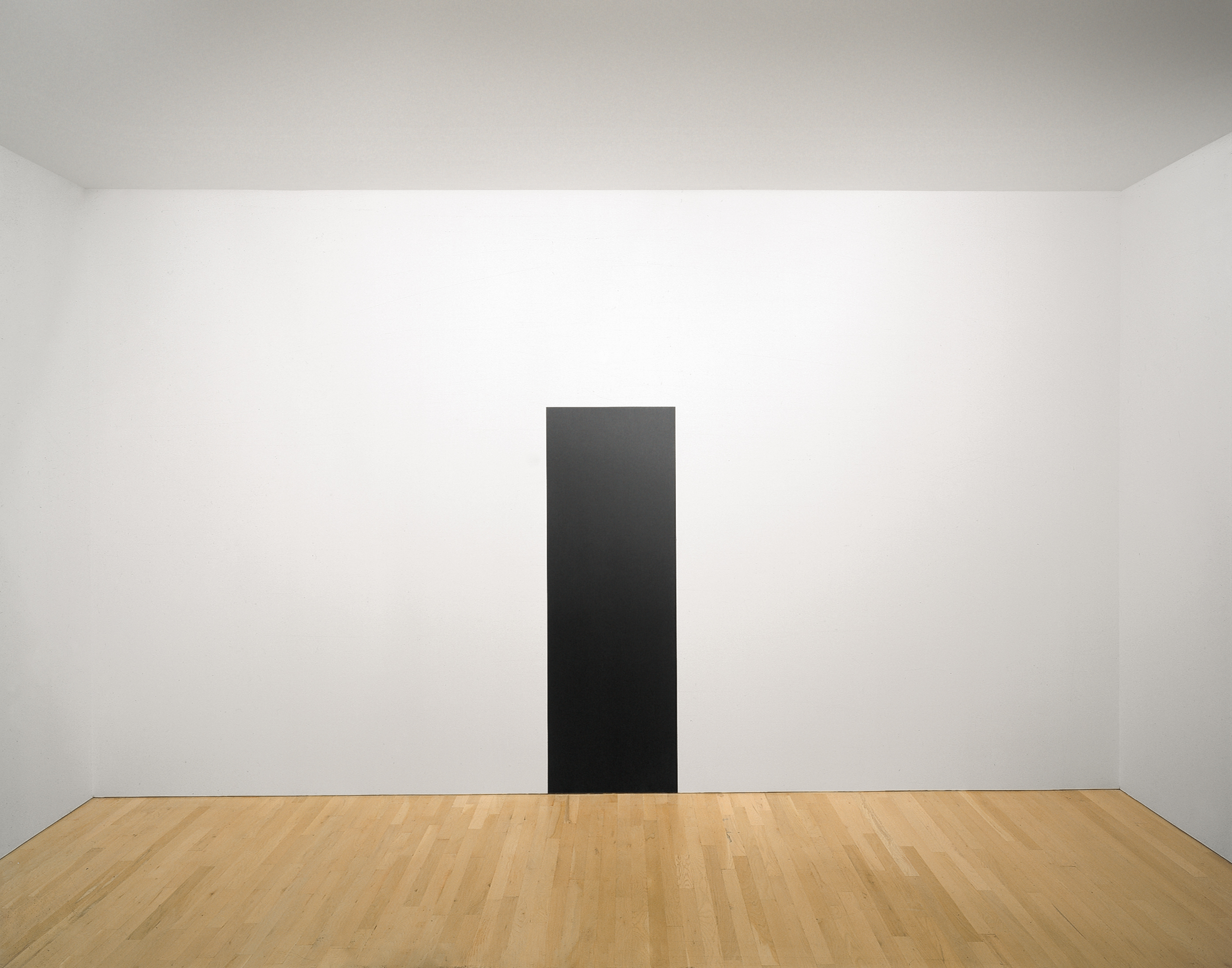 Can you discuss how the material of light relates to your work?

Light is a very important element in my work. When I work with pencil on paper, MDF or directly onto the wall, or when I apply black paint-stick (oil and wax based bars of colour) on paper or anodised aluminium. My interest is not the darkness of these materials, but their unique abilities to showcase the shifting quality of light as it moves across the surfaces that I am creating. It is at these moments that my works spring to life. At the core, I am interested in creating means of depicting light within the picture-plane.

Donald Kuspit, the art critic, referred to you as the ‘last abstract hardliner’. How do you view this description in the context of how you see your work?

Donald Kuspit wrote several essays on my work. You could say he is somewhat of an expert on my work and has an integral knowledge of all aspects of my practice.

The essay Donald Kuspit wrote and titled ‘the last abstract hardliner,’ was first published in the catalogue accompanying my mid-career retrospective at the [Weserburg] Museum of Modern Art in Bremen.
It was an essay primarily about my aluminium wall sculptures. One of the largest pieces in this show is entitled ‘Hardliner’, [the work is part of the Lafrenz Collection, on loan at the Hamburger Kunsthalle]. He referred to this specific piece to describe the complexity of this entire body of work; Kuspit described in great detail the side and front views of my pieces and how at these points my works evolve from the two dimensional into the three dimensional. 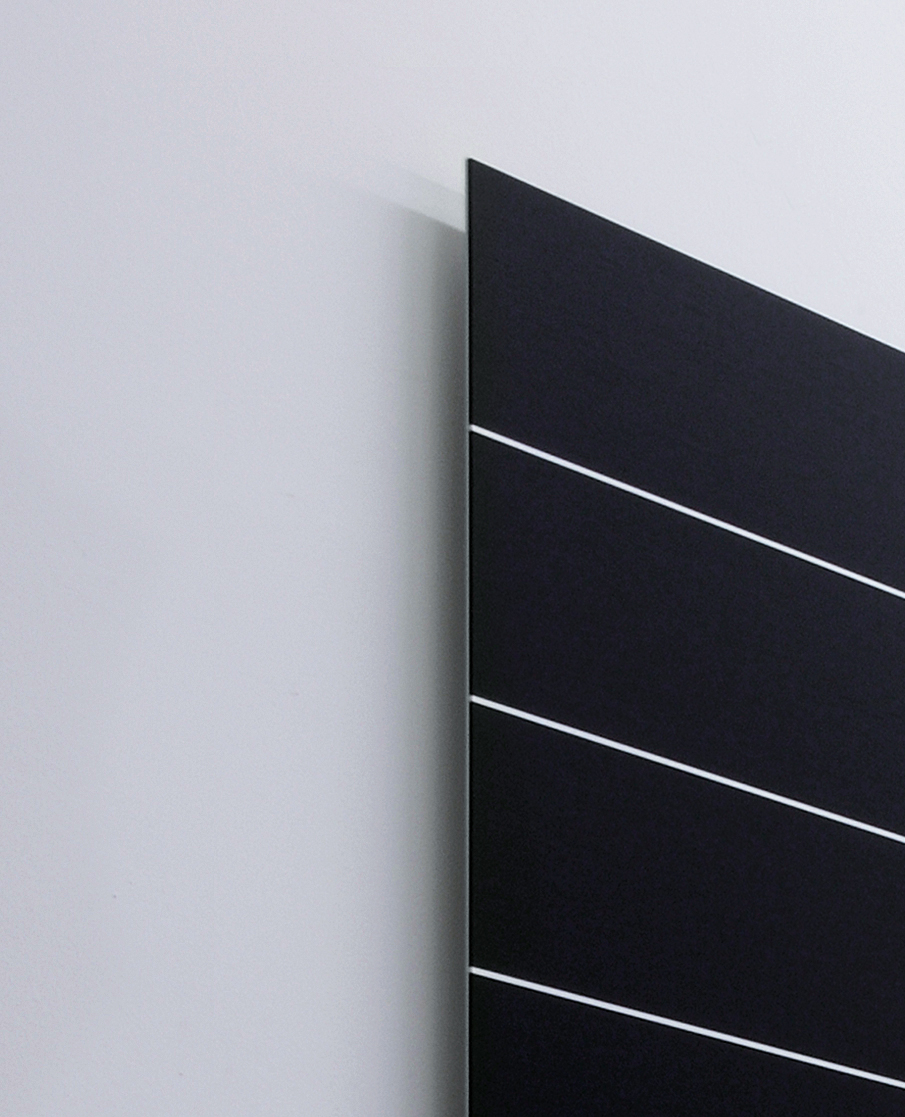 In your drawing practice, you continue to use the same quite specific materials: Faber Castell 9B pencils and MDF. What is it about these materials you are drawn to?

I began making pencil drawings on MDF panels in 1994, after working mainly on paper or directly onto walls. I was looking for a stable, flat and strong material, which could give me a harder surface to work on than paper. This was primarily in response to the fact that large format sheets of paper are very fragile, difficult to handle and required frames as support.

At the same time, I was looking for an everyday, humble and industrial material. Something that wasn't common in the art-world or used by many artists. I wanted something that was known as a craftsmen’s material, used for building shelves or furniture.

To be able to handle these works without having to touch their fragile surfaces I designed a special handling-frame system as well as custom crates. The panels had a very interesting three-dimensional body to them and an intriguing almost object like character. I like the fact that these panels are distinctly removed from a ‘classic’ idea of a drawing.

The delicately drawn pencil surfaces on the face of the panel lend the works an appearance that tether on the edge of drawing, wall sculpture, and object. I want them to encompass all three of these almost contradictory qualities collectively.

Your practice focuses on monochromatic tones. Why do you appear to have excluded colours outside of this range?

Temporary Ground. Territory (The Sleeper) (2015) is a large-scale black and white artwork created on anodised aluminium and installed in the Edinburgh space. Can you discuss how and why you decided upon this work for this space?

Temporary Ground. Territory. (The Sleeper), 2015, a four part aluminium work, is site-specific in the sense that it was created and done for this exhibition, it is installed at the Sleeper Art Space, located in the centre of Edinburgh. It is a highly artificial space, built and designed by Neil Gillespie in 2000, a partner of Reiach and Hall Architects. 'Sleeper' is located within the architect’s studio building.

Since its inception in 2000, 'Sleeper' has been run in close collaboration with Alan Johnston. The programme predominantly features international artists, who have shown a wide variety of projects at the space. I was inspired by the works of the artists that exhibited there before me. 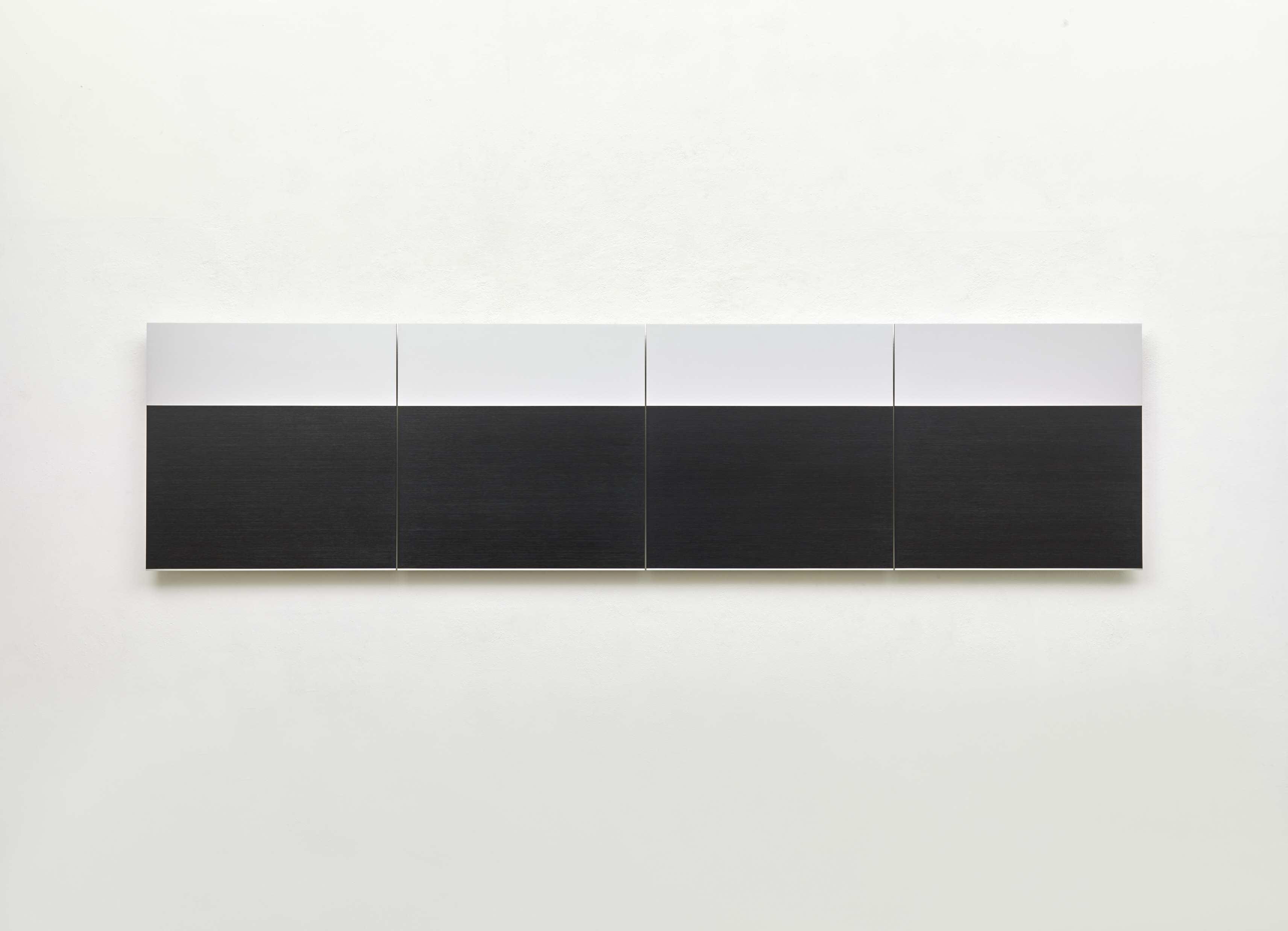 The work which I created for this exhibition is drawn with paint-stick directly onto four anodised aluminium panels. The upper third of each panel reveal’s the pure silver, anodised section of the support, while the bottom two-thirds are overlaid with black paint-stick (oil & wax based). The black part doesn't run all the way down to the lower edge of the panel. It stops short exactly 4 mm above the bottom edge. 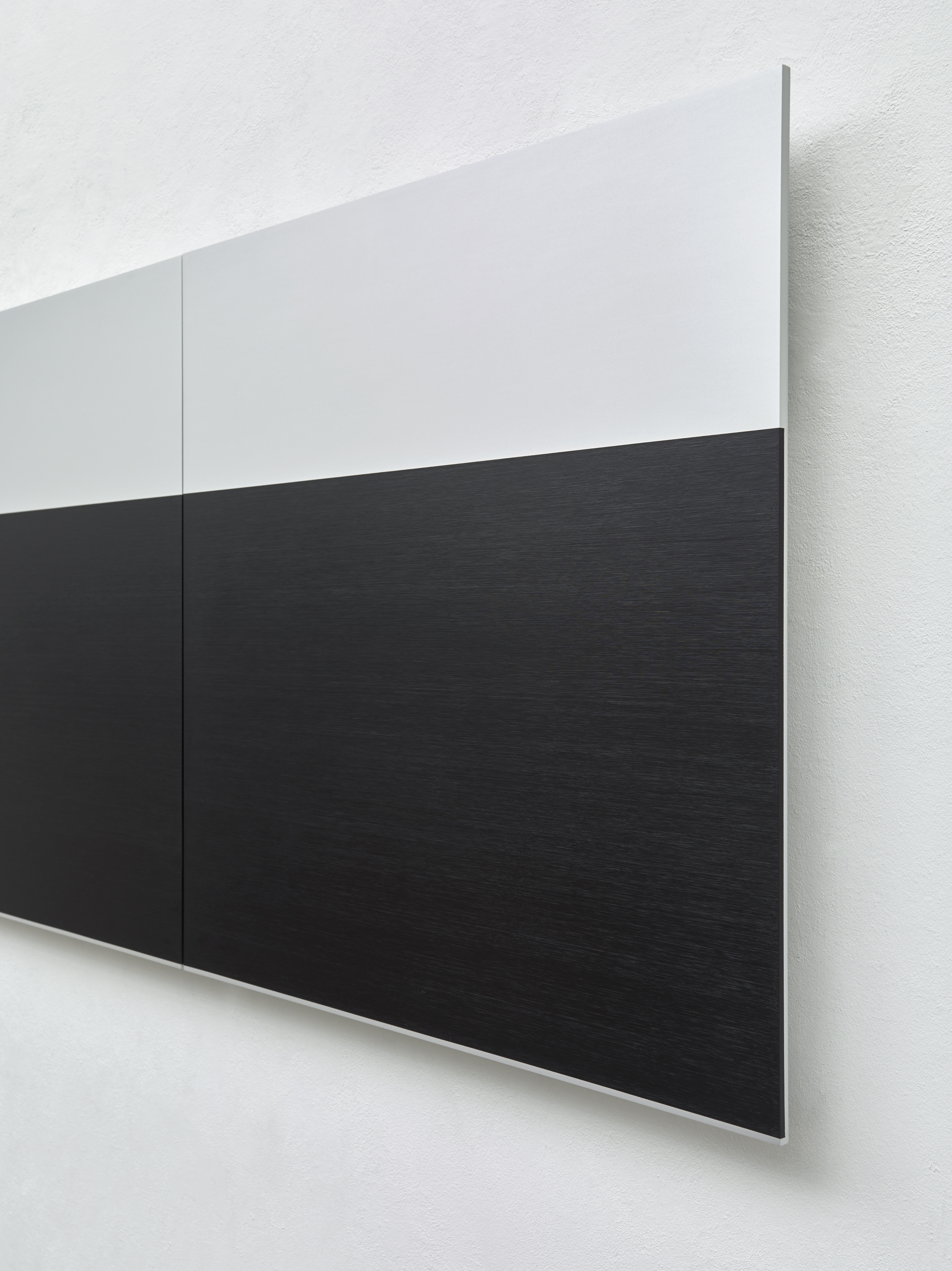 Furthermore, the black paint-stick is drawn half way around the edges of the 8mm thick panels, leaving the 4mm line of anodised aluminium exposed, allowing you to see the silver of the panels sides, too. The silver line is connected both with the 4 mm line along the bottom and the field that makes up the top section.

The distance between the panels themselves is precisely 4 mm, as you approach the work your eyes are drawn across all four panels, to back and sides and up towards the lighter top section. Then around the panels, jumping over the 4 mm gap to the next panel, to the next and so on. I hope the experience is a real tour de force, at first, the work appears simple but as you approach it, it reveals all its intricacies. 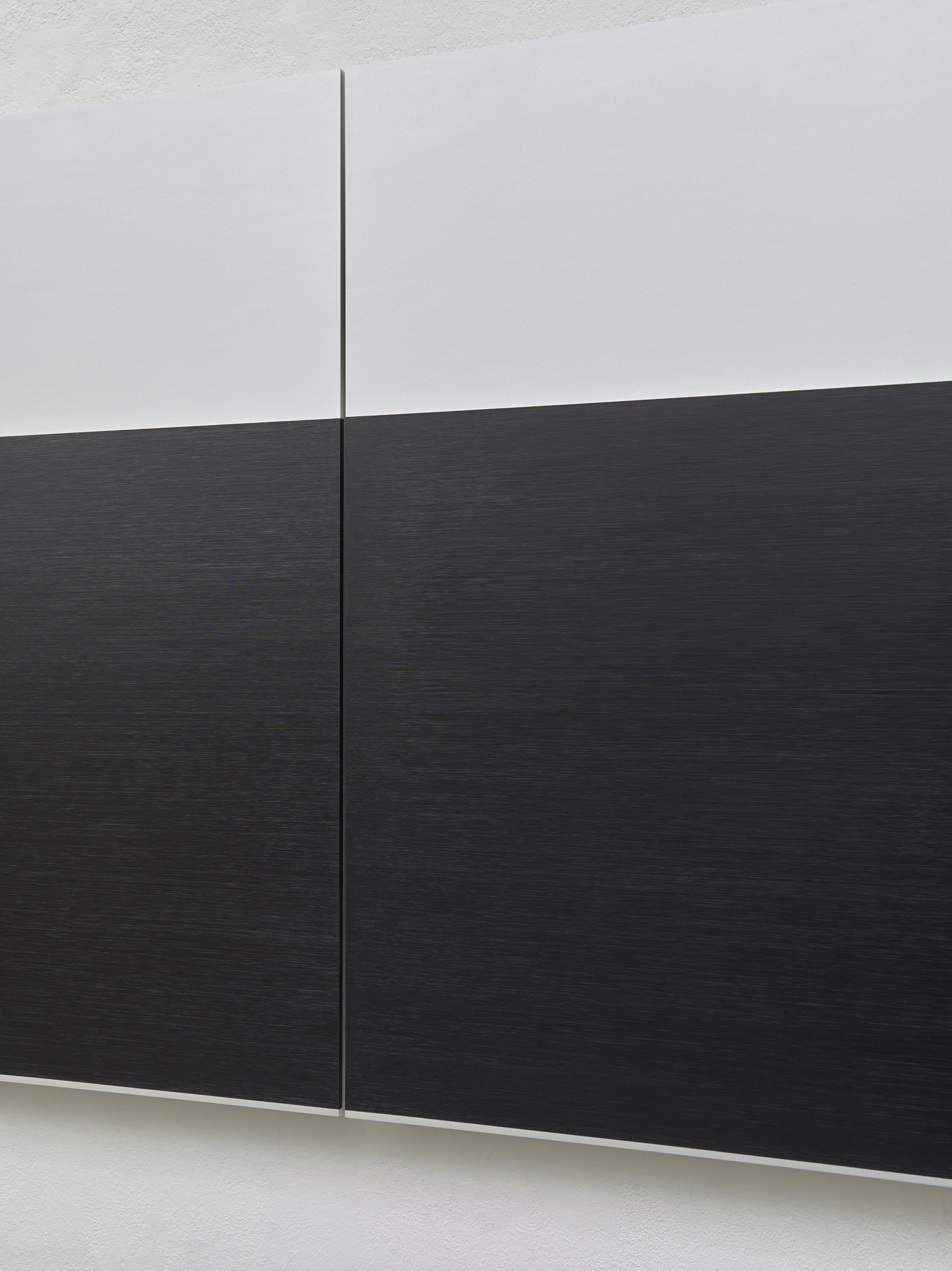 Of course, these details and the way I articulate the composition of the work also shows my continued interest in the 3rd dimension.

For a museum survey at the Weserburg in 2008, you also created a new wall drawing especially for that exhibition. That wall drawing referenced an experience you had in your youth when you played in a Punk band in Hamburg. Can you tell me about this work?

The wall drawing conceived for my show at the Museum in Bremen is entitled Lowdown. The title refers to one of my all-time favourite songs by the band ‘Wire’. I first heard it on a live recording made at the Roxy in London during the spring of 1977 and later the studio version, which appeared on their first album Pink Flag.

Lowdown was installed in the first space leading into my mid-career retrospective, on the wall opposite to the entrance. The work is the largest wall drawing I have ever made, executed with pencils directly onto the museum wall. The piece is still on the wall to this day. The dimensions of the drawing itself are 160 x 900 cm, positioned on a 600 x 1200 cm wall. The work reacts like an enormous projecting screen. You can see the entire room and all the visitors surrounding you in it. Like its origin, the work can be read as a stage. —[O] 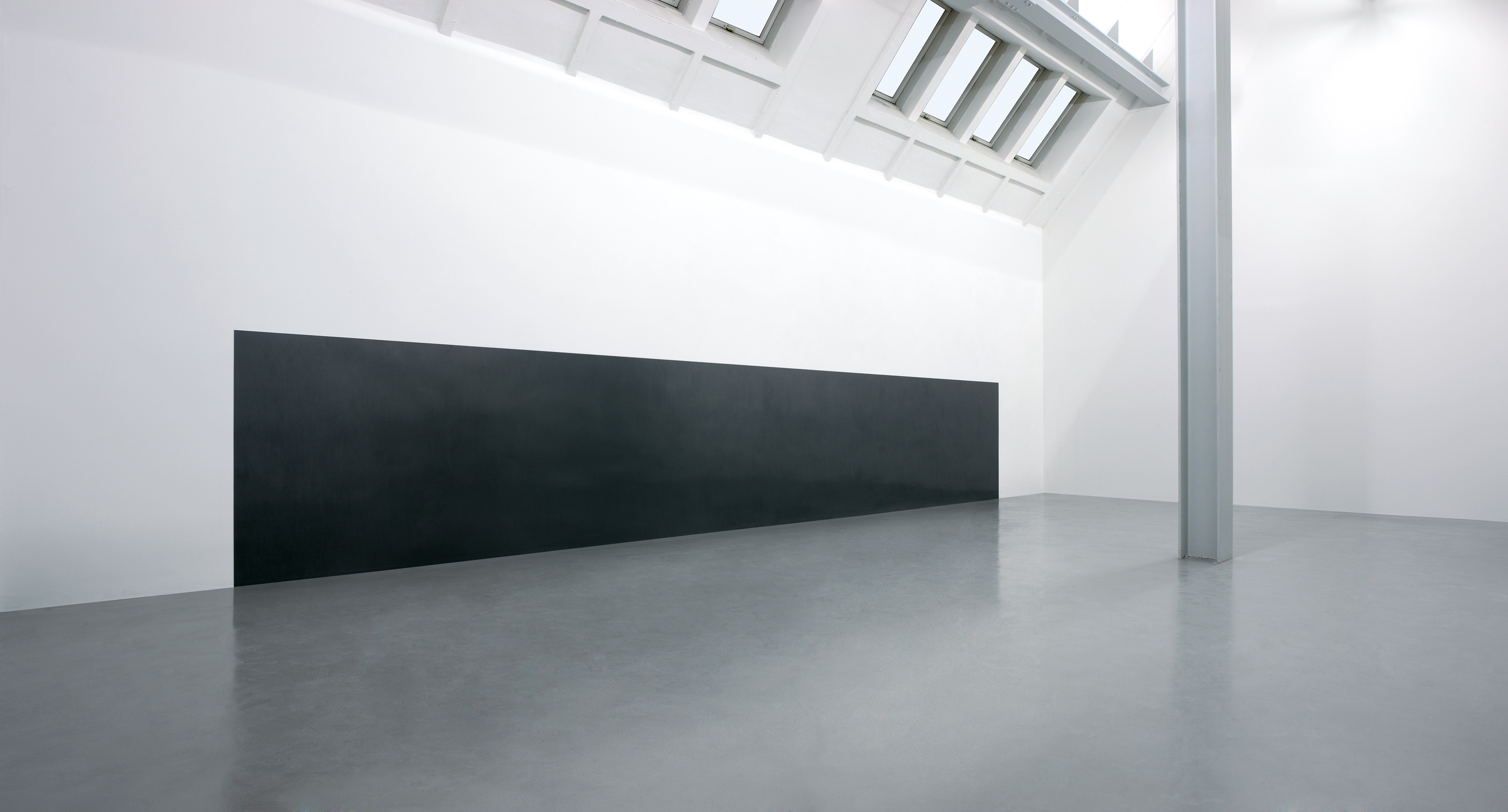 Born in Hamburg 1964. Lives and works in Hamburg, Germany. 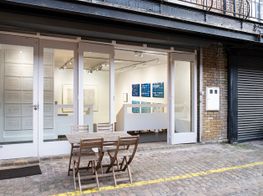 Established at the turn of the century by Niklas and Daniela von Bartha, the London-based gallery, Bartha Contemporary, places a strong emphasis on non-figurative and conceptual works by mostly established American and European contemporary

Bartha Contemporary was founded by Swiss-German couple Niklas and Daniela von Bartha in January 2000. The gallery relocated to its current space in St James's in 2019. The program has a strong emphasis on non-figurative and conceptual contemporary 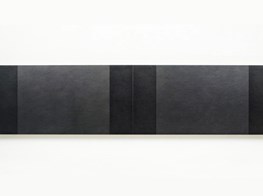