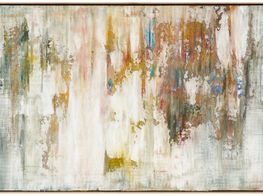 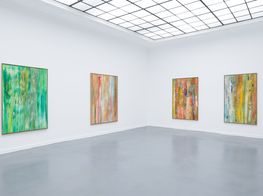 How does one encapsulate the unseen? Franco-Iranian artist Sassan Behnam-Bakhtiar has been engaging with this inquiry for over a decade, more recently at SETAREH, Berlin. 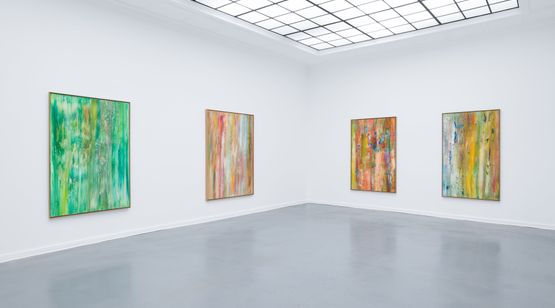 Behnam-Bakhtiar's dizzying colour gradients gesture towards the tremors of an inner life that can be felt rather than observed. Suspended in a strange temporality of vibrational flux, they unsteady the eye.

'Seeing is not just a visual representation,' he says from his studio in France. With a suite of 14 paintings for Floating on Silence (8 December 2022–14 January 2023), his solo exhibition at SETAREH, Behnam-Bakhtiar says he is trying to drown out the noise.

Indeed, his recent exhibition Journey Within (6–26 September 2022) at Sotheby's Monaco, which included a live painting act by the artist staged alongside a performance by British rapper Tinie Tempah, displayed busier paintings with an impressionist colour palette.

His latest work takes a more nuanced approach to tonality, separating pale pinks and acid yellows from deep blues, such that darker shades often look like fabric tears or decaying walls. Forming a palimpsest, they resonate with the kind of built histories that are the subject of preservation. 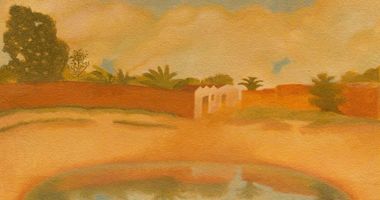 To make his paintings, Behnam-Bakhtiar uses a metal construction tool to scrape natural pigment into grid-like formations, a method he calls peinture raclée (literally scraped painting), which involves layers of removal and application that can take up to two months for each canvas. The grids, normally the subtle substructures of his work, become less visible.

Behnam-Bakhtiar's dizzying colour gradients gesture towards the tremors of an inner life that can be felt...

'There was never a plan to my art,' he says, 'But now it's much more free.' A liquid materiality has evolved from his experimentation with an expanded painting practice—he grinds rocks originally from Persepolis and semi-precious stones to add sediment and a crystalline quality. 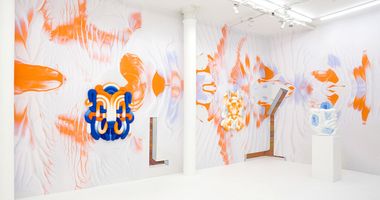 'I'm trying to create my own mixes, which changes the nature of the medium,' he says. 'Time is important because it creates the texture, which is starting to feel like mud. Each work has become so heavy that it's no longer painting on top of the canvas, it's sculpture.'

In the early 2010s, the artist worked with collage, integrating ornate Persian architectural motifs, and his paintings retained strong figurative elements during his first solo exhibition at London's Saatchi Gallery in 2018. 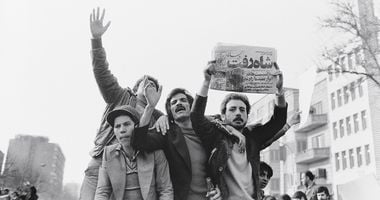 Ocula FeatureIranian Art at LACMA: In the Fields of Empty DaysRead More

Today, these representational works are difficult to attribute to him. 'I was much younger then and frustrated with portrayals of Iranians,' Behnam-Bakhtiar says. 'And to see so much dark, political work because they are in demand. I wanted to show other facets of Iranian life.'

He doesn't speak much about his time in Iran or the Iran-Iraq war, despite its impact on the evolution of his work. 'It was a completely different context then but still, the youth are at the front lines.'

'I have been forced into silence a few times,' he adds cryptically. It's no surprise that Behnam-Bakhtiar has a serious meditation practice, which began as a means of survival. 'It was my understanding that energy is a window to what exists within, and without which took me to this place.'

'If one can transform the mind to become like still water, others will gather around it to see their own image,' he writes in his exhibition statement. 'What is beautiful for me as an artist is to be able to transfer thoughts and feelings to a viewer without saying a word—for someone to get a glimpse of what I was going through while painting,' he explains. 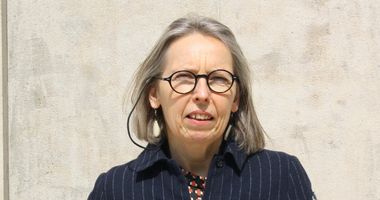 'People suffer as they struggle to communicate what they need. I've found there's a lot of unnecessary chatter by meeting people from all walks of life,' he continues. 'I'm now at the point where I want to focus on what's important.' This attempt to peel away the extraneous resonates with his statement, which is a call for stillness, a sense of being comfortable with the 'void', without fear, desire, or narrative.

It's no surprise that Behnam-Bakhtiar has a serious meditation practice, which began as a means of survival.

As someone who has a troubled relationship with his country, Behnam-Bakhtiar abstains from tokenising his cultural identity. His father, who was both part of Iran's cultural scene and the fallen regime, fled the Islamic Revolution to Paris, where Behnam-Bakhtiar was born in 1984.

The artist's formative years in the early 1990s were spent in Iran with his mother, which involved a series of confiscations and incidents with the morality police. He left again in 2002 only to return during the Green Movement protests, and after a serious incident in 2009, he stayed away.

His only dedication to Iran, Floating on Iran (2022), in his current exhibition is a chromatic abstraction of map and territory. Globular shapes interrupt linear movements like falling streams. Patches of green turn into blood-orange, separated by midnight blue and burgundy red, beginning to hint at form. —[O]

In his colourful paintings the Franco-Iranian artist Sassan Behnam-Bakhtiar has developed a signature style of scraped painting – oscillating between abstract and figurative structure. With his works he allows the canvas to become a resonance body

Beyond words, to gain insight on the true nature of reality, and to awaken one's remembrance are the three pillars of Floating on Silence. Surrendering to silence occasionally will bring forth extraordinary feelings, promoting patience and access 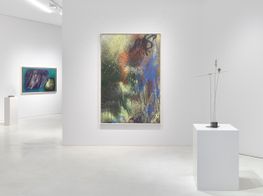