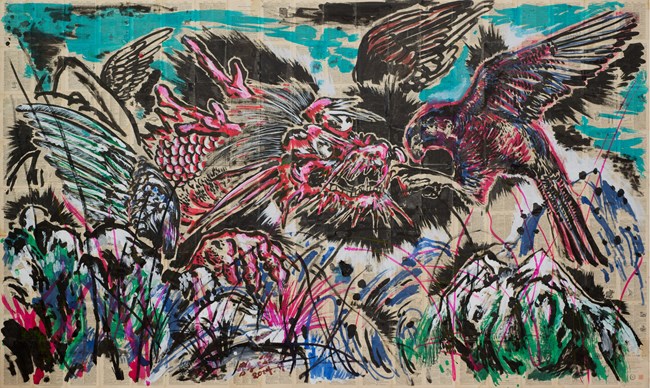 Painting on paper | Paper of Old Xinhua Dictionary
150 x 250 cm
59 1/16 x 98 7/16 inches
‘Wulanmutu’ mountain is situated in  territory of Bajiazi village of Fuxin Mongolia Autonomous County, it was called ‘Alimatu’ mountain at an early age. Both of the two name are the transliteration of Mongolian, the former in Chinese is ‘Mountain growing red trees’, the latter ‘Mountain growing pears’ was once used a long period of time. The main peak of the mountain is ‘Guodi(the bottom of a pan) Mountain’. Its altitude of 831.4 meters makes it the highest mountain in Fuxin. A magnificent view can be overlooked from the main peak. It was called ‘Yimatu’ by the folk.  The reason that SUN Xun entitles his artwork as ‘Yimatu Drama Mountain’ is for its meaning of standing on top of the peak, overlooking the city's historic changes. He is raised in Fuxin, there exists his childhood experience, this memory for him is just as the historical development of the drama.
Contact Gallery
Add To Favourites
View Close Up
View To Scale
Contact Ocula 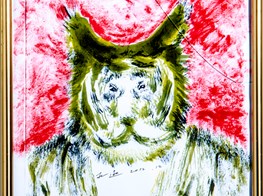 Sign up to be notified when new artworks and exhibitions at ShanghART are added to Ocula.
Sign UpLogin