Andra Ursuţa's sculptures and installations, made from a wide variety of materials and found objects, oscillate between the evocative and the vulgar, invoking the individual and collective fears and desires that underpin contemporary society. The sources of Ursuţa's inspirations are similarly diverse, ranging from personal experience to art history, popular culture, and her native Romania.

For Andra Ursuţa, who has been living in New York since 1999, her homeland of Romania often provides inspiration for her artworks. The wooden stake in Ass to Mouth (2010), for example, is covered in black rubber modules that evoke both the influential Romanian sculptor Constanin Brancusi's Endless Column (1918) and a sex toy, while its sharp end references another famous Romanian, Vlad the Impaler. In Ursuţa's work, the act of impalement and Brancusi's tribute to Romanian soldiers killed during World War I take on a touch of humour, cruelty, and irreverence.

Implications of violence, psychological and physical trauma, and fear resonate throughout Andra Ursuţa's work. In Crush (2011), a full-body cast of a young woman—taken from the artist—lies flattened on the floor and covered in 'semen' made from wax. Ursuţa has related the work to her unrequited crushes and, by extension, the fear of failure and rejection. Stoner (2012), included in her 2013 solo exhibition Solitary Fitness at Venus Over Manhattan, New York, features a baseball-throwing machine that hurls fake stones at a wall of flesh-coloured tiles. The wall, encrusted with what appears to be human hair, implies a human cost to the mechanical torture device, which was partly inspired by the use of cranes for execution by hanging in Iran.

Ordinary objects and structures are rendered unfamiliar in Andra Ursuţa's sculptures, which often teeter on the grotesque. Andra Ursuţa: Alps, her solo exhibition at New York's New Museum in 2016, revolved around the eponymous centrepiece: recreational rock-climbing walls that were otherwise standard save for their phallic handles. Alps was accompanied by an earlier series of 'Whites' (2015), anthropomorphic obelisks embedded with casts of human teeth, eye sockets, and nostrils.

Divorce Dump (2019), included in the 58th Venice Biennale, consists of casts of human ribcages fashioned into trash cans and filled with personal items kept by the artist after her divorce. Placing Ursuţa's 'marriage trash' on public view, they are indicative of the private, intense emotions that characterise Andra Ursuţa's work.

In 2019, Andra Ursuţa also held her major solo exhibition Nobodies at Ramiken Crucible, New York. She joined David Zwirner in the following year and held her first solo exhibition with the gallery, Void Fill, at its Paris location in 2021. 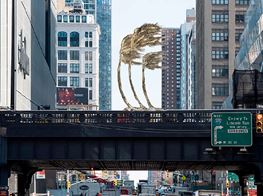 Be among the first to know when new artworks and exhibitions by Andra Ursuţa are added to Ocula.