A sleek, minimalist structure of irregularly stacked boxes, the New Museum on the Lower East Side is one of Manhattan’s largest established contemporary art institutions. The museum’s exhibition programmes are exclusively dedicated to presenting and supporting contemporary art with an international scope.

Founded in 1977 by former Whitney Museum curator Marcia Tucker, the New Museum was created to fill a gap in representation of living younger artists in art museums. The New Museum moved into its current premises in 2007, which was custom-designed by Tokyo architects Kazuyo Sejima and Ryue Nishizawa/SANAA.

Art at the New Museum

A self-declared non-collecting institution, the New Museum focuses on presenting and collaborating on new works with artists with diverse backgrounds and perspectives. Artists exhibited in and out of the Museum's semi-permanent collection largely focus on critical issues affecting contemporary society.

Among the established artists who have been shown over the years are Jenny Holzer, Vito Acconci, Urs Fischer, Louise Lawler, Emory Douglas, Lynda Benglis, and Ugo Rondinone.

A younger generation of artists also feature in the gallery’s programme, their work spanning traditional and new technological mediums. Among them are Hong Kong filmmaker Wong Ping, whose anthropomorphic cartoons tell colourful and disturbing stories of his home city, and Los Angeles performance collective My Barbarian, which addresses social and historic problems and visions of togetherness.

There are also artists bringing new ideas to traditional forms, including Brooklyn-based figurative painter Jordan Casteel, recognised for her colossal portraits of friends and people in her community, and textile artist Zhenya Machneva, whose tapestries reference Russia’s derelict industrial landscapes.

The New Museum holds a diverse programme of curated group and solo shows, both onsite and digitally through its First Look: New Art Online platform.

The New Museum also hosts a series of residencies in studio spaces across the street and online. Committed to generating new ideas and dialogues, the New Museum Commissions support new projects through branching initiatives.

Among the New Museum’s ongoing initiatives are IdeasCity, a recurring 2-year collaborative platform for civic projects, and ongoing digital-art partnership with Rhizome, which has created digital offshoots like the World on a Wire partnership with Hyundai. Both fall under the umbrella of the museum’s NEW INC project, an interdisciplinary arts and culture incubator.

Initiated in 2009 with the group exhibition The Generational: Younger Than Jesus, the New Museum Triennial is a recurring international exhibition devoted to emerging artists from around the world. 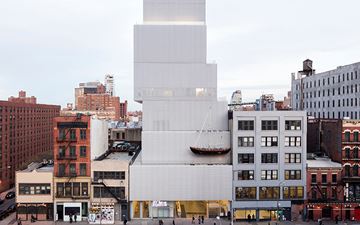 Faith Ringgold holds a mirror to the aspirations, hardships, accomplishments, and daily lives of Black Americans.

Nathalie Djurberg and Hans Berg reflect on their evolving collaboration and a softening presence of empathy in their latest work.