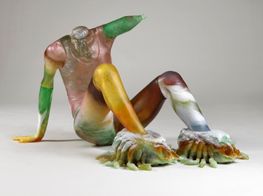 Born in Salonta in 1979, a town on the border between Romania and Hungary—most known as being the site for the country's largest salami factory during the communist era—Ursuţa's work looks to collective memories of Romanian culture to deal with important personal and contemporary issues, from femininity to folklore.

Ursuţa is perhaps most known for her polymathic sculptural practice—working from micro to macro scale; from small domestic tableaux to sprawling installations—in addition to working with a broad range of materials including cardboard and concrete.

Ominously titled Void Fill, this exhibition takes its name from the filler packaging used to surround packaged items to protect them during transit. A play on words, many of the new sculptures also function as hollow vessels, as if they could be topped up with liquid.

This interest in functionality places her work in dialogue with important feminist artists such as Magdalena Abakanowicz, Nicola L., and Sarah Lucas.

Explaining Ursuţa's interest in the relationship between language and object, curator Myriam Ben Salah has noted, 'Ursuţa digs into language ambiguities, mundane situations or imaginary logistical problems to actually make objects, in an attempt to grasp a world completely coated in many layers of nonsense.'

Announcing representation last year, Zwirner enthused, 'Not only is she a true artist's artist, but her visionary work resonates in many ways and pushes the boundaries of sculpture into new and salient formal and narrative territories.'

All of the sculpture in Andra's show utilises both established and contemporary sculptural methods simultaneously. Sculptures such as Predators 'R Us (2020) are formed using both 3-D scanning and wax casting—of objects and her own body—before finally being crafted in glistening lead crystal.

Other works, such as Yoga Don't Help (2021) expand on the artist's investigations first shown in Venice, appearing in contorted anthropomorphic, zoomorphic, and seemingly extraterrestrial shapes.

Explaining her fascination with the body, Ursuţa has previously remarked, 'I return to the body a lot because it represents an obstacle, vulnerability, decay, shame. It's the thing that is impossible to transcend.'

The show also includes a series of 'paintings' made with photoreactive dye applied to velvet, all titled False Hope (2020). In each work, skeleton-like hands grasp a glowing, iridescent, and almost radioactive form.

The artist has previously used photograms to create the figurative appearance of X-rays reflecting oppressed bodies. Ursuţa is on the final shortlist to receive the prestigious High Line sculpture commission in New York for 2022 and 2024 iterations.

Her proposal, Broken Obelisk, is 'a hollow cast-glass sculpture of an anthropomorphic obelisk bent into a seated position. The translucent monument resembles a lingering ghost hovering at the edge of visibility.' —[O] 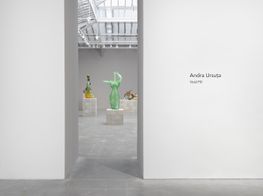