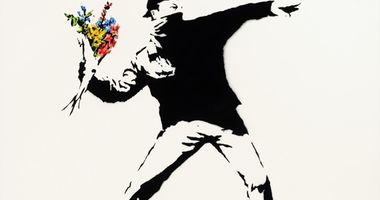 Since first appearing in the 1990s on the English street art scene, the artist known to the world as Banksy has risen to cult status internationally while maintaining his trademark anonymity.

Banksy's works are readily recognisable for their witty, playful, and sardonic imagery exploring themes of counter-culture, protest, anarchism, violence, ideological conflict, privacy and surveillance, the loss of childhood innocence, the cruel ironies of capitalism, and the absurdities of the consumerist art world in which he now operates. The enigmatic street artist's stencilled and freehand images were initially stylistically influenced by fellow graffiti artist 3D (Robert Del Naja, who, like Banksy is said to be, is also from Bristol), although the artist Blek le Rat is normally credited with pioneering the stencil technique.

Banksy's works usually take advantage of existing urban features—such as a bright orange flower growing from a wall in TriBeCa, New York, to reference the attack on the World Trade Centre—or exist on unusual surfaces like a live elephant, such as in the exhibition Barely Legal (2006, Los Angeles). One politically rich subject matter has been Palestine and the West Bank barrier—a towering part-wall, part-fence that runs in and around the West Bank. Making his first visit to Bethlehem in 2005, the artist painted the wall in several places, hinting at the beauty and freedom beyond such measures.

Expanding into the institutionalised art world has broadened Banksy's scope. His breakout exhibition, Turf War (2003, London), was held in a former warehouse in Hackney; the show involved live animals and a depiction of the Queen as a chimpanzee and Winston Churchill with a vivid green mohawk. Over the past 20 years, the artist has expanded his practice to include screen prints, painting, sculpture, installation, collaborative art projects, and film. His documentary, Exit Through the Gift Shop, about Thierry Guetta (a French Los Angeles-based artist) made its debut at the Sundance Film Festival in 2010 and was nominated for an Academy Award. His largest projects—the dystopian North Somerset theme park, Dismaland (2015, Weston-super-Mare) and the fully functioning Walled Off Hotel (2017–ongoing, Bethlehem, Palestine)—feature his work alongside that of local artists and prominent musicians.

Alongside his paintings, sculptures, prints, and installations, Banksy also engages in a form of prankster performance art. His exploits include sneaking satirically altered oil paintings into high-profile museums (in the 2000s), releasing 164 rats in his exhibition Crude Oils (2005), and remotely triggering Girl With Balloon (2006) to shred itself in Sotheby's (October 2018). The artist has also produced several art books relating to his work and other street artists, including Wall and Piece (2006), published by Cornerstone. Meanwhile his works continue to grace the streets of numerous cities around the world. Despite all this activity his background and identity remain concealed.

Read More Ocula News Who Are the Most Followed Artists on Instagram? Tokyo, 10 February 2022

Takashi Murakami cracked 2.5 million followers this week, but he's a long way behind the most popular artist on the platform.

Paintings and installations in Banksy's summer series have already been removed, erased, and vandalised. How many more will be commoditised or covered up?

Banksy offers the first physical work to be auctioned in exchange for cryptocurrency.

LONDON — Banksy has always had a complicated relationship with the art market. His unsanctioned street works deliberately challenge the idea of art as a tradeable commodity, but often still end up at

Among the gleaming Bugattis, Aston Martins and Porsches at one of the UK's premier car auctions next month will be a 17-tonne truck with a price tag to match them all. Bonhams has announced it is sell

A long-lost interview with a young man claiming to be Banksy, the world's most famous anonymous street artist, has been found in a television company's vault.

Banksy has revealed that he designed the Union Jack stab-proof vest that British rapper Stormzy wore during his headline set at this year's Glastonbury festival.

Sign up to be notified when new artworks and exhibitions by Banksy are added to Ocula.
Sign Up Login