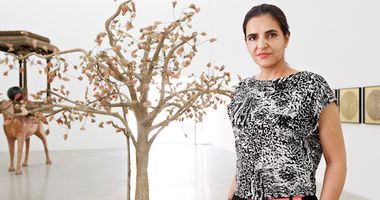 Bharti Kher was born in the United Kingdom in 1969. She studied painting, graduating in 1991 from Newcastle Polytechnic. At 23, she moved to New Delhi in India, where she lives and works today.

Her work encompasses painting, sculpture and installation, often incorporating found materials, using them to transform objects and dissolve the distinction between two and three dimensions. Sculptures she has made since the mid-2000s combine animal with human body parts to create hybrid female figures that confront the viewer with a compelling mixture of sexuality and monstrosity. In contrast, her bindi ‘paintings’ are abstract and aesthetic, turning the mass-produced consumerist items into artworks of sumptuous beauty. Her work is engaged with the ready-made, minimalism and abstraction (through repetition), mythology and narratives.

It has been hard, lately, to think about art. I don’t mean to imply that art isn’t powerful, transformative, or even a necessary distraction. The problem, really, is that it’s been hard to think about anything besides the new president-elect, or how every check I deposit helps fund the poisoning of the sole water supply at...

Hauser & Wirth Somerset is pleased to welcome Bharti Kher as artist-in-residence from September–December 2017. Kher has exhibited at numerous museums and institutions internationally, including the Fr

Sign up to be notified when new artworks and exhibitions by Bharti Kher are added to Ocula.
Sign UpLogin