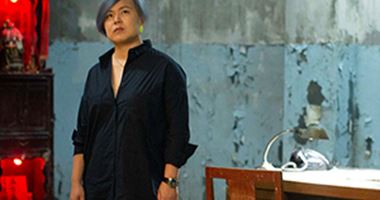 Known for her films and multimedia installations, Cao Fei is one of China's most well-known contemporary artists. Working across photography, video, and digital media, Cao explores permeating alienation in a changing China characterised by rapid development and urban growth. She is particularly interested in popular culture, technology's effect on human relations, and the role of fantasy in youth subcultures.

Over the years, Cao's work has been consistently concerned with the ability of pop culture, technology, and the virtual world to provide a means of escape. In her eight-minute 2004 video Cosplayers, Cao focused on disillusioned youth who find refuge in video games and fictional characters. By donning the costumes of their favourite characters, the young people in the film could escape the ennui of their ordinary lives.

Similarly, and launched in 2008, the project 'RMB City' is based around an imaginary city made by Cao on the virtual world-building game Second Life. Using the platform, Cao created a fantastical futuristic city that 'combin[ed] overabundant symbols of Chinese reality with cursory imaginings of the country's future.' The project was attributed to Cao's online avatar, China Tracy, and was first exhibited in RMB City (2008) at the Serpentine Gallery in London. In 2009, Cao followed up with RMB City Opera, a 40-minute experimental performance inspired by Cultural Revolution-era propaganda plays.

Exploring again the power of imagination to subvert dehumanising labour, Cao undertook an extended residency at a lighting factory outside of Guangzhou in 2006. Over the period of six months, Cao interacted with the workers (most of whom were migrants to the Pearl River Delta from other parts of China), seeking to understand their lives beyond the assembly line. To Cao, the factory stood in as a symbol of China's rapid integration into a global capitalistic market and its subsequent human cost. Her time at the factory culminated in the 20-minute film Whose Utopia (2006), in which the employees temporarily abandon their repetitive work to perform their talents, passions and dreams; the video shows labourers doing tai chi, dancing, and playing music.

Cao's interest in urban life was continued in the dystopian film La Town (2014). Featured in the 56th Venice Biennale and based on Marguerite Duras' novel Hiroshima Mon Amour, the film tells the story of a small town struck by an unspecified disaster. Instead of actors and life-size sets, however, Cao uses miniature clay models and plastic toys to convey the film's narrative. Made the next year, the video Splendid River (2015) focused on a building in Guangzhou that replicates Vienna's Secession, which Cao used to comment on the culture of copying in China that has arisen from globalisation. The video was exhibited during Cao's solo show Splendid River at the actual Secession, for which the artist mounted Chinese characters on the Austrian building's facade so as to mimic its bootleg copy in Guangzhou.

In 2015, the artist began incorporating robotic vacuum cleaners into her work, a symbol of the preternatural technological development that appears frequently throughout her practice. In Rumba II: Nomad (2015), the vacuums clean up dust and debris in an area undergoing demolition on the outskirts of Beijing. Also focusing on robots was her 2018 Robert H N Ho Family Foundation Chinese Art Initiative commission Asia One (2018), an hour-long film that followed two lonely human protagonists and one robot in a factory where humans are no longer needed. The film was shot inside the world's first fully automated sorting centre in Kunshan, Jiangsu Province.

Cao's films are often accompanied by installations that echo their videos. When exhibited in One Hand Clapping at the Solomon R Guggenheim in New York in 2018, Asia One was screened in a room full of e-commerce paraphernalia and documentation. Similarly, when the site-specific film Prison Architect (2018) was shown in 2018 exhibition A Hollow in a World Too Full at Tai Kwun Contemporary in Hong Kong, sets from the film's production were presented throughout the institution's galleries. Music is also integral to her films, serving as a tool for quoting disparate cultural references.

Cao earned a BFA from the Guangzhou Academy of Fine Arts in 2001. In 2006, she received the Chinese Contemporary Art Award Best Young Artist Award, and in 2010 she was a nominee for the Future Generation Art Prize and a finalist for the Hugo Boss Prize.

China's post-80s artists are no longer all that 'young', nor do they much need that moniker. With the oldest of that generation fast approaching 40, to call them young would be misleading given how ra

...many people see my work as being very much focused on contemporary China, containing themes such as urbanisation and social transition. This exhibition, however, showcases the videos i.Mirror (2007), La Town (2014), and Prison Architect—none of which directly discuss urbanisation or modernity...

The trouble with [AR]T—an augmented reality initiative produced by Apple in collaboration with the New Museum—began when I tried to get tickets. Because it was framed as a free public art experien

Read More
Related Press Why does the heart want what it wants? Desire at Imma 7 September 2019, The Irish Times

The film Prison Architect (2018) by Cao Fei uses the physical space of the prison as a metaphorical complex to reflect common understandings of freedom and captivity. More than presenting the prison

Read More
Related Press how has the internet changed the way we interact with art? 26 June 2018, i-D Vice

The state of the "millennial" is a complex and nebulous thing. Some define Generation X by its widespread affinity for decorative succulents. Some note an eye for a very specific, and hotly debated, s

Be among the first to know when new artworks and exhibitions by Cao Fei are added to Ocula.
Sign UpLogin