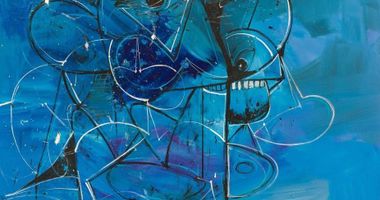 George Condo is an American artist known for his distinctive, deformed and sometimes demonic paintings that combine figuration and abstraction. Most heavily influenced by the contrasting aesthetics of old master painting, cubism and pop art, Condo also draws from art historical references as diverse as Picasso, Paul Cézanne, Jean-Baptiste-Siméon Chardin and Willem de Kooning. He is renowned for mixing madness and beauty in his often figurative output, asserting that art's potential is not to invent, but to reconfigure, retool and innovate. The juxtapositions and strange figures in his artworks are a stand-in for the chaos of contemporary life.

The intermingling of contemporary art and music has always been an important part of Condo's practice. For two years, he studied art history simultaneously with guitar and composition at the University of Massachusetts Lowell. After leaving college, Condo moved to Boston and joined proto-synth/punk band The Girls. When Condo met Jean Michel-Basquiat after The Girls opened for the artist's band in New York City in 1979, Condo decided to move to New York to pursue a career in art. It was here that he coined the term 'artificial realism', a term that he used to describe his life-like representation of imagined things and that would come to define his practice.

While Condo moved and worked between Los Angeles, New York, Paris and Cologne during the 1980s, he was primarily associated with New York's East Village art scene, where he also held his first exhibitions. It was in Europe that he met gallerist Barbara Gladstone, who organised a significant two-gallery exhibition of his work at Pat Hearn and Barbara Gladstone Galleries in New York, helping to launch his career. In 1987, Condo's Dancing to Miles (1985–6) was included in the Whitney Biennial; the painting is a large, turbulent and analytic cubist-inspired canvas that mirrors the frenzied improvisation of jazz musicians, drawing comparisons between erratic free-form music and art.

Condo has maintained close relationships with many important artists and thinkers of his time, with their works inspiring his, and theirs in turn being influenced by him. At one point, Condo worked in Andy Warhol's factory, where he was involved in applying gold dust to the older artist's 'Myths' series. Condo was also close with Keith Haring and often painted in his studio. Later he met William S Burroughs, with whom he collaborated on a series of sculptures, paintings, writings and etchings. In Paris, he befriended French philosopher Félix Guattari, who wrote often on Condo's work. Salman Rushdie's 2001 novel Fury includes a chapter inspired by one of Condo's paintings titled The Psychoanalytic Puppeteer Losing His Mind (1994). Notably launching him into the larger world of pop culture, in 2010, Condo painted the cover art for Kanye West's album My Beautiful Dark Twisted Fantasy. The image, featuring a figure holding a bottle with a nude winged female on his lap, was quickly censored by iTunes, pointing to the often provocative nature of Condo's artwork.

Borrowing compositional techniques from traditional oil painting and early-20th-century modernist works, Condo's output is most often portraiture-based, full of weird, villainous characters with jutting teeth, large ears and disjointed features. For example, the oil-on-canvas painting The Cracked Cardinal (2004) shows a figure from the torso up, wearing traditional Catholic garb with bulging eyes and bared teeth broken into irregular planes. Similarly, his 2004 painting Little Ricky depicts a nefarious-looking, bulbous-faced youth with cigarettes burning out of each ear and a green bottle balanced atop his head. In Condo's words, his characters encompass 'quite a crew: Indian chiefs, cavemen, office bosses, the nun, two-bit hustlers, low-life criminals, people with one tooth, one eye, protruding chins, enlarged facial features', and are drawn both from life and his imagination. His sculptures too are often absurd renderings of bodies; the 2012 patinated bronze The Liquor Store Attendant is a large-eared bust, with obvious finger marks denoting the artist's handiwork, while The Farmer's Wife (2005) is a bronze approximation of a woman's head with a carrot protruding from her forehead.

Condo has exhibited extensively internationally, most notably including the exhibition Mental States, a 2011 retrospective at New York's New Museum that travelled to Museum Boijmans Van Beuningen in Rotterdam, the Hayward Gallery, London, and Schirn Kunsthalle, Frankfurt. In 2017, The Phillips Collection in Washington, DC mounted a major survey of his work titled George Condo: The Way I Think, which focused on his drawings, sketches and 'drawing paintings'. In 2004, Condo taught a six-month course at Harvard University entitled 'Painting Memory', and in 2000, John McNaughton directed the documentary Condo Painting, which followed the artist over a course of a year while he painted a major large-scale oil painting titled Big Red.

As the world grapples with frightening new levels of terrorism, racism and global political unrest, George Condo says he has ironically never felt more inspired. The artist, best known for his fantast

George Condo is a New York-based artist whose career launched in the East Village in the early 1980s. During this time, he also worked in Andy Warhol's factory before moving to Los Angeles and holding

These, along with abstract portraits and compositions like Landslide and Tumbling Forms, mark a departure from Condo’s previous work involving drawing, pastel and charcoal like those in his 2014 Londo

Scrawled repeatedly on the window panes of a mid-Wilshire building, from the base to the rooftop, is artist John Baldessari’s call from his 1971 lithograph: “I will not make any more boring art.” The sentiment is also a promise of sorts from the building’s new inhabitants, gallerists Monika Sprüth and Philomene Magers....

The mind of American artist George Condo has been referred to as a place where 'Picasso meets Looney Tunes.' Watch him at work in his New York-studio where he draws and paints his take on a 19 th -cen

'I kind of draw like you’re walking through the forest, where you don’t really know where you’re going, and you just start from some point and randomly travel through the paper until you get to a plac

7 new artworks by George Condo have recently been added to Ocula. Sign up to be among the first to know when new works become available.
Sign UpLogin