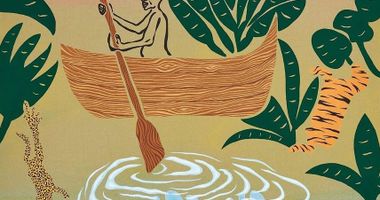 Joel Mesler is known for his playful alphabet paintings that combine vibrant flora and fauna with wry text.

Joel Mesler was born in 1974 in Los Angeles. He graduated from the San Francisco Art Institute with a Master of Fine Arts in 1999. Mesler opened his first gallery in Los Angeles in 2000, and has since managed several galleries in Los Angeles, New York, and Hudson.

In the early 2000s, Mesler met art dealer David Kordansky, whose business was beginning to flourish. Mesler ran a printing press within Kordansky's gallery until 2003, when he opened a space of his own. Mesler and Kordansky would continue to work together throughout the next 20 years.

While working as an art dealer, and promoting early-career artists including Rashid Johnson and Henry Taylor, Mesler continued developing his own painting practice. From 2015, Mesler directed his focus towards painting and began exhibiting across the United States and internationally.

In the Alphabet of Creation (for now) series, Mesler depicts individual letters from the alphabet in a unique, decorative style reminiscent of illustrations in children's books. Through satirical texts, Mesler hints at fundamental moments in his life.

The snake is a recurring motif in Mesler's alphabet paintings. Often coloured dark red with a white diamond pattern, Mesler's snakes weave around an array of dense green foliage to portray individual letters. The leaves evoke the iconic Martinique wallpaper at the Beverly Hills Hotel, a place which brings up intense childhood memories for Mesler.

The Alphabet of Creation (for now) works are made using pigments on raw linen. Expressive line drawings of hands, faces, and text often feature alongside the snakes and foliage, to create a distinct visual language suggestive of Mesler's commentary on his multiple roles as artist, art dealer, and father.

In his 2021 exhibition, In the Beginning, Mesler presents a series of his iconic banana leaves alongside tropical scenes of wild animals and plants. Graphic illustrations of animals camouflaged by fauna and drinking from rivers loosely recall the paintings of 19th century French artists Henri Rousseau and Paul Gauguin.

Mesler's pattern-based paintings are overlaid with inspirational phrases such as 'you deserve great things', and 'you are never alone'. The artist describes how his parents would say such phrases to him as a child at bedtime. After falling asleep, Mesler would dream of exotic landscapes featuring details of his parents' goodnight farewells.

In the Beginning depicts the various dreamscapes Mesler imagined as a child. The surreal backdrop of the tropical jungle, along with images of whisky glasses, disco balls, and inspirational quotes, together present an enigmatic new body of work.

Joel Mesler holds his first solo exhibition in Asia at Lévy Gorvy with an uplifting series of paintings.

Be among the first to know when new artworks and exhibitions by Joel Mesler are added to Ocula.
Sign Up Login