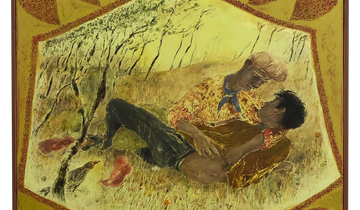 Kai Althoff is a German multi-disciplinary artist whose work has been featured in numerous important institutional shows, including in the Venice Biennale in 1993 and 2003.

The artist's paintings, installations, sculptures and music purposefully evade categorisation and often invoke a sense of enigmatic foreboding with their sombre palette and frequent representation of violent male figures.

Althoff was born in Cologne in 1966 and raised with the anti-authoritarian ideals of his West-German parents, which ultimately came to shape his attitude towards art-making in his later years. He is entirely self-taught, attending art school but never completing his studies. Althoff instead learned through the art and music demi-monde of Cologne in the 1980s, befriending influential husband-and-wife artists Michael Krebber and Cosima von Bonin with whom he later worked.

Since 1990, he has been part of the long-time musical collaboration 'Workshop' with artists Christoph Rath, Stephan Abry and Stefan Mohr.

Althoff has never owned or rented a studio for his practice, unwilling to divide the spheres of work and life. As part of his unconventional approach, he has cultivated a widely-known contrarian public persona, describing in an interview with MoMA curator Laura Hoptman that he was 'like a child' and did not want to be remembered. Althoff's ambivalence is a centrepiece in his exhibitions; he creates spaces that are often crowded and immersive—more like emporiums than gallery spaces.

In 2009, Althoff moved to Crown Heights, Brooklyn and splits his time between Germany and New York.

Best known for his paintings and drawings, Althoff's practice invites the viewer to participate in free-association and revels in open-endedness as its defining characteristic, in a style similar to that of the CoBrA artists of the mid-20th century.

Often working in artistic collaborations, Althoff explores numerous themes through his work including notions of community.

From the time of his emergence onto the art scene, Althoff's works have blended a variety of art-historical influences like German Expressionism, religious imagery and the childlike work of the CoBrA artists with expressions of highly personal utopias that become part of his own self-imagery.

In the same vein, in 1992, Althoff produced Erwachsen werden, Fabio (Growing Up, Fabio)—16 drawings in bright orange and green conceived as a children's book, about coming to terms with gay sexuality. The work is set in the same era as the 1970s movement for sexual and political liberation.

In 2016, Althoff curated hundreds of his paintings, sculptures and drawings for the series Kai Althoff: and then leave me to the common swifts (und dann überlässt mich den mauerseglern) at MoMA, New York. Transforming a section of the gallery, the exhibition featured a white wooden ramp which led visitors into the space. The ramp was overhung by tents of white fabric and angular partitions that held clusters of found objects—antique dolls, ceramics and personal memorabilia—surrounding his paintings and drawings. Speakers were built into the floor, playing folk-modernist music that truly enveloped the viewer into Althoff's created world.

In 2020-21, Althoff exhibited a show with Whitechapel Gallery, London, Kai Althoff goes with Bernard Leach, which presented his works with reference to the British studio potter Bernard Leach. The show was a retrospective of Althoff's three-decade career. The curation was done by Iwona Blazwick, Emily Butler and Cameron Foote. The exhibition was similar to the environment Althoff created at MoMA in 2016; the artist divided the gallery space and lined it with a canopy of translucent polythene sheeting that was specifically left untouched over the COVID-19 spring lockdown. He collected leaves, twigs and fungus to be hung at Whitechapel. Althoff's continued emphasis on the freedom of childhood was confirmed in an exhibited drawing he made at the age of three or four (c.1969), presented in the exhibition in response to the intricate pottery works.

Kai Althoff has been the subject of significant institutional solo and group exhibitions, as well as numerous commercial gallery exhibitions.