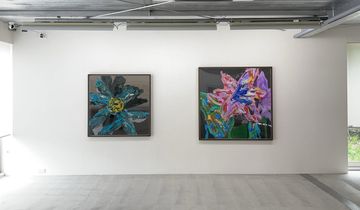 The multimedia practice of Japanese contemporary artist Koeda Shigeaki prompts his audience to stop and smell the roses. His vivid flower prints are reminiscent of both Georgia O'Keefe's famous close-up paintings and the intricate floral illustrations of traditional Japanese painters.

Koeda Shigeaki was born in Kyoto in 1953. He studied painting at Kyoto Seika College until 1974. In the early 1990s, Shigeaki spent significant time in the United Kingdom developing his artwork; he studied at Goldsmiths in London as part of an art fellowship through the Japanese government. He was then selected as a Senior Research Fellow at the Ruskin School of Art at the University of Oxford, and was later a Visiting Artist at Modern Art Oxford.

Since the 1980s, Koeda Shigeaki has developed a practice that combines both painting and photography. Work on his major series Flowers-between the eyes began in 2003, when he started to develop Lambda prints of colourful and vibrant flowers. The finished series includes 100 Lambda prints representing 100 flowers. He makes each work by setting a flower behind a glass plate and painting it with watercolours. He then lights and photographs the image to be printed as a Lambda print. Fittingly, each artwork is 100 x 100 cm; these large depictions of small flowers therefore make a striking impact on the viewer when exhibited.

He has also investigated nature through sculpture since 2008, creating intricate ceramic flowers, as well as sculptures of dogs and rabbits. In addition, he has experimented throughout his career with acrylic and silkscreen, as well as acrylic on canvas, to represent flowers, still lifes, and animals.

Sign up to be notified when new artworks and exhibitions by Koeda Shigeaki are added to Ocula.
Sign Up Login