The mission of the Taipei Fine Arts Museum is to promote the preservation, research, development and popularization of Taiwanese modern and contemporary art; to keep abreast of global trends and establish a variety of channels for exchange; to raise the general public’s understanding of and participation in modern art; to help Taiwanese modern and contemporary art to thrive; and to cultivate fuller artistic attainment in the people, in the hope of forming a contemporary society with aesthetic sense and cultural perception.

In 1976, following the central government’s decision to enhance the cultural life of the City, the Taipei Municipal Government embarked on a plan to build a high-standard museum. The construction was inaugurated in October 1980, and completed in January of 1983 during the mayoral tenure of Teng-hui Lee. Ms. Martha Su from the National Palace Museum was appointed head of the museum’s Preparatory Office. The Taipei Fine Arts Museum (TFAM) officially opened its doors on August 8, and its initial exhibition was unveiled on December 24, 1983.

On September 6, 1986, Dr. Kuang-Nan Huang was appointed TFAM’s first director by the Education Minister of Taipei City. Dr. Huang was later appointed Director of the National Museum of History on February 27,1995. His successor was Mr. Chen-Yu Chang who became director on September 7, 1995. On June 4,1996, Director Chang was replaced by Ms. Pao-Kuei Liu, Deputy Director of the Ministry of Education. The following Museum director was Dr. Mun-Lee Lin, an associate professor of the National Taipei Teachers College who served for four years until July 31, 2000. After Dr. Lin’s departure, Mr. Huang Tsai-Lang, then the Deputy Director of the City’s Department of Cultural Affairs, took up the post on September 1, 2000 and served in this position until March 26, 2007. 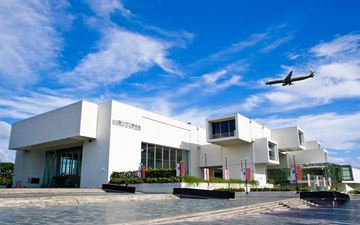 With his work on view as part of Vienna Art Week, Ocula Advisory checked in with Erwin Wurm to find out what he has been working on during the lockdown.

Sign up to be notified when new artworks and exhibitions at Taipei Fine Arts Museum are added to Ocula.
Sign Up Login