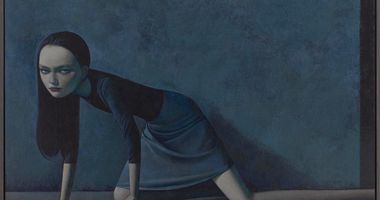 Born two years before the Cultural Revolution began, Liu grew up in a society strictly regulated by the state. Although many Western books were banned, he was able to read some that his father had kept hidden. While these memories would later serve as sources of inspiration, his vast knowledge of Western cultural history was formulated during the years he spent in Europe. In 1990, having completed his studies at the Central Academy of Fine Arts and the School of Arts & Crafts, both in Beijing, the artist continued his education at Berlin's Universität der Künste. He returned home four years later, then left again for a six-month residency at the Rijksakademie in Amsterdam in 1998.

Liu's early works from the 1990s are characterised by their depictions of childlike figures with round features. These paintings are humorous and light-hearted, but also endowed with a touch of the ominous. Bright Road (1995), for example, shows two winged children smiling and posing before an open window, seemingly oblivious to the falling aircraft in the distance or, somehow, happy that it is about to crash. In Warship Children (1996), a pair of children wearing sailor suits study a map, similarly unaware or uncaring of the red-hued warship that glides towards them in the background.

Among the range of European cultural icons that Liu references in his paintings, Mondrian's geometric compositions are perhaps the most frequent. One of the artist's earliest works, the black-and-white etching Angel before Mondrian (1994) features a cherub looking through a telescope. Behind him, a Mondrian painting hangs on the wall. This motif of a young child—usually a girl—observing or standing before the Dutch painter's works recurs throughout Liu's paintings, such as in Mondrian in the Afternoon (2001) or Boogie Woogie, Little Girl (2005). In his large-scale painting Bamboo Bamboo Broadway (2012), Liu also reconfigured the Chinese symbol of bamboo stems as a geometric abstraction after Mondrian's grids, such as in Broadway Boogie Woogie (1942–1943).

Liu's other works draw well-known characters and figures from diverse points in Western art history and literature, reimagining them in his soft brushwork. Shakespeare's 16th-century hero appears in a contemporary setting with a gun in Romeo (2002); Mozart (2009) portrays the Austrian composer as a child with a doll-like face; and Pinocchio (2011) captures the beloved fairy tale character in shades of warm brown and red. Miffy, a more contemporary creation of Dutch artist Dick Bruna, is a popular character in Liu's paintings, observing monochromatic paintings alongside a little girl in International Blue (diptych) (2006) or posing at a wedding in Miffy Getting Married (2014). The artist adopts Miffy as himself in Self portrait (2013), in which the girl rabbit sits at a desk with a line drawing of herself before her. Red, blue, and yellow colour pencils are scattered on the desk, recalling the three colours that Mondrian favoured for his paintings (notably Composition with Red Blue and Yellow, 1939).

In an interview with Jing Daily in 2015, Liu said that his inspiration had shifted from his childhood memories and his imagination to objects found in everyday life. This is perhaps best demonstrated in his book paintings, which render closed or open books in a photographic style. Close-ups of volumes open to empty pages, such as Book Painting 6 (2014), allude to the artist's love for the book as an object, while depictions of pages from a book, such as Book Painting No. 12 (Lolita, Weidenfeld & Nicolson, 1995, Page. 11) (2016) or Book Painting No. 19 (Story of O, Grove Press Inc. New York, 1965) (2017), point to his love for literature.

In 2018, Liu held Storytelling, a solo exhibition at Prada Rong Zhai in Shanghai that featured a selection of his works from 1992 on. Other notable museum shows include Mondrian and Liu Ye at Mondriaanhuis, Amersfoort (2016), and Window on China at Kunstmuseum Bern (2007). His work was also included in Viva Arte Viva, the International Art Exhibition of the 57th Venice Biennale, 2017.

The image of the young artist who destroys his paintings —realizing their lack of originality, or at least the absence of a distinctive voice—is one of the most recognizable romantic tropes, even in

Auctions do not make an art market, merely a market out of art. Accordingly Paris remains the center of art that London pretends to be. To British bafflement, it is not only about money (though that too). The Parisian atmosphere, though, is cordite tense. Both police and homeless people are more noticeable, though begging is not. Despite the...

Known for his bright-hued paintings of childlike round-faced figures, acclaimed artist Liu Ye's new catalogue raisonné includes 'a number of works that have never been published,' according to its edi

The group exhibition, Beijing Voice: Relations presented by Pace Beijing was open on December 10th, 2013 and the exhibition continues to focus on the field and phenomenon of Chinese contemporary art. In an open and creative forum, it deconstructs, restructures and presents Pace Gallery‘s understanding of today’s art environment. The...

The following is an excerpt of a conversation between Lilly Wei and Liu Ye in his Beijing studio in the summer of 2015.

Be among the first to know when new artworks and exhibitions by Liu Ye are added to Ocula.
Sign UpLogin