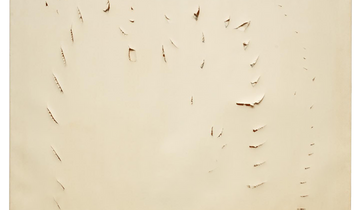 Lucio Fontana was an influential Argentine-Italian artist and theorist, best known for being the father of Spazialismo (also known as Spatialism). His trademark perforated canvases drew both the ire and admiration of critics in the 1950s and 1960s.

Fontana was born in Argentina in 1899 to an Argentinian mother and an Italian father who was a sculptor by trade. Although he moved to Milan in 1905 for his education, Fontana returned to Argentina in 1921 to work in his father's sculpture studio for several years. Later, Fontana established his own studio. In 1926 he participated in the first exhibition of Nexus, a group of independent young Argentine artists. Fontana then went back to Milan in 1927 to study at the Accademia di Brera for two years. As a result of his studies, he had his first solo exhibition at the Galleria del Milione in 1930.

The 1930s saw Fontana begin to develop an expressive abstract style, producing flat bronze and ceramic sculptures such as Scultura Astratta (1934, painted iron). In this period he became involved with the Parisian group Abstraction-Création and the Milanese, anti-fascist artist group Corrente. He also began to collaborate with architects.

When World War II broke out Fontana moved back to Argentina, where in 1946 he founded the Academia Altamira. Collaborative efforts between the students and teachers of the Academy produced the 'Manifiesto Blanco'—a manifesto calling for art that combined elements of colour, movement, sound, time and space. When he moved back to war-ravaged Milan in 1947 Fontana expanded on these ideas and established Movimento Spaziale (Spatialist Movement). In collaboration with other theorists he created the 'Primo Manifesto dello Spazialismo' (First Manifesto of Spatialism). This was one of five manifestos produced between 1947 and 1952. Spatialism, through a deeply philosophical set of ideas, was primarily concerned with escaping the tyranny of the traditional two-dimensional surface. It wanted to project a work into real space, doing so by marrying art and science through new techniques and materials.

In 1949, Fontana exhibited his first 'Spatial Environment' at the Galleria del Naviglio in Milan, featuring a giant abstract shape suspended in an empty darkened room and illuminated by curved lines of neon. Later shows on this theme were multi-dimensional experiences, featuring sound, abstract sculptural shapes, luminous paint and fluorescent lighting. The 'Spatial Environment' concept not only pioneered the idea of environmental and installation art, but also, through its unconventional materials and methods, was a forerunner of the Arte Povera movement.

More familiar to an international audience are Fontana's series of perforated abstract works that were begun in the late 1940s and share the title 'Concetto Spaziale' (Spatial Concept). He would paint canvases in monochromatic colours, or simply stretch out a material like linen, then stab the material to create buchi (holes). These holes violate the material's flat surface, exposing the space beneath. The buchi were not the product of random stabbing but formed patterns, whether simple circles, as in Concetto spaziale (Teatrino) (1965, waterpaint on canvas and lacquered wood frame) or complex abstract designs as in 18 Concetto Spaziale, (1960, linen).

In the mid-1950s Fontana added paintings with distinctive tagli (cuts)—vertical or diagonal slashes made with a sharp blade on a monochrome surface—to his repertoire. These incisions reveal the black gauze on the back of the canvas, contrasting the monochrome surface to create the impression of an infinite void.

From the mid- to late 1950s, Fontana also violated the two-dimensional surface of the canvas with embedded pieces of coloured glass, scratches and coloured areas mixed with sand. By breaching the surface of the two-dimensional canvas in such ways Fontana blurred the lines between painting, sculpture and expressive gesture. He began introducing breaches and punctures into his ceramics as well, continuing to work in his distinctive surface-disrupting style until his death in 1968.

Ocula News ‘Panorama’ Brings Over 50 Works to Procida, Italy’s Capital of Culture 2022 Rome, 25 August 2021 Artworks will appear in unusual locations, including the dock, terraces overlooking the Gulf of Naples, and the Chapel of Santissima Purità.

View More Ocula News How Auction Houses are Approaching Their Crucial Summer Sales New York, 25 June 2020 Sotheby's, Christie's, Phillips and Bonham's have changed what they're selling and how they're selling it for major auctions taking place over the next two weeks.

Read More Ocula Feature Armory Week Lowdown: Shows to See in 2019 By Sharmistha Ray, New York With The Armory Show opening to the public on 7 March and a host of other fairs taking place concurrently, Sharmistha Ray presents a list of shows to see in New York.