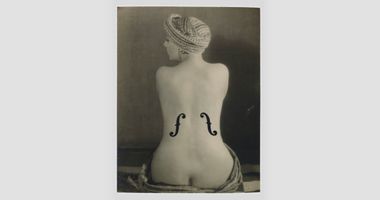 A versatile artist whose practice ranged from painting, photography, and film to poetry and prose, Man Ray was a prominent figure in the avantgarde movements of Dada and Surrealism.

Born Emmanuel Radnitzky in 1890 in Philadelphia, and raised in New York City, abbreviated his first and surnames. After finishing high school in 1908, he became an enthusiastic visitor of art museums and galleries. He frequented 291, a Manhattan space established by the influential photographer Alfred Stieglitz, and it was there that the artist developed a passion for photography.

In 1915 Ray befriended Marcel Duchamp, who had come to New York, and the two participated in the New York Dada movement. Initially led by writer Hugo Ball in Zurich in 1916, Dada rejected rules of traditional art-making, often allowing chance to lead the creation process. Ray's early oil painting, The Rope Dancer Accompanies Herself with Her Shadows (1916), depicts an abstracted figure with ropes hovering over large expanses of colour. It also suggests Dada influences in that he incorporated a random pattern of paper scraps he had seen on the floor.

Known mostly for his radical experiments with camera-less photography, Man Ray also identified as a painter and experimented with sculpture and readymade objects. Man Ray's art reflects the Dada and Surrealist embrace of the bizarre and illogical.

Dada and Surrealist Art in Paris

Man Ray moved to Paris in 1921, connecting with the Dada and Surrealist movements there. The latter was led by writer André Breton, who penned the First Manifesto of Surrealism in 1924 and encouraged explorations of the mind and aesthetics of the irrational.

The artist's subsequent works reflect Dada and Surrealist tendencies, such as the humorous and illogical combination of an iron and a row of tacks in the readymade Gift (1921) and the spinning discs in the film Anémic Cinéma (1926), the latter a collaboration with Duchamp and Marc Allégret. For L'Étoile de Mer (1928), now regarded as a classic Surrealist film, the artist shot through a sheet of glass, generating a hazy, dream-like quality.

IIn Paris, Man Ray cultivated a reputation as a photographer. One of his most well-known works, Le Violon d'Ingres (1924) shows his then-lover Kiki de Montparnasse nude—save for a turban—with her back to the camera. In a humorous gesture, Man Ray added the two black f-holes of a violin to accentuate the likeness between her body and the instrument. Celebrity sitters for the artist's portraits included Coco Chanel, Peggy Guggenheim, Pablo Picasso, Aldous Huxley, and Virginia Woolf, and he also contributed photographs to fashion magazines such as Harper's Bazaar and French Vogue.

In 1929, Man Ray had an affair with photographer Lee Miller, who became an important collaborator during their four-year relationship. The two experimented with a solarisation technique that involved exposing a film negative to light as it developed, creating a silvery quality. This effect can be seen in the c. 1929 Solarised Portrait of Lee Miller and the 1931 reclining female nude portrait Primat de la matière sur la pensée.

After Miller left him, Man Ray created a number of iconic works featuring body parts that recalled his ex-lover. The photograph, Glass Tears (1932), for example, depicts a close-up of a woman's eyes, with glass tears on her face. For this he used a mannequin that resembled Miller.

When Germany occupied Paris in 1940, Man Ray left for Los Angeles. There, he married dancer and model Juliet Browner. He continued to focus on painting and photography, producing works that included 'Shakespearean Equation' (1948), a series of paintings presenting mathematical models as actors in a Shakespearean play.

Man Ray and Browner returned to Paris in 1951. From then until the time of his death in 1976, the artist continued to work across mediums. He also published an autobiography, entitled Self Portrait, in 1963.

Man Ray has been the subject of both solo and group exhibitions in galleries and institutions around the world.

If the work sells for its estimate, it will fetch more than any photograph previously purchased at auction.

Surrealist forms are echoed in this coloured pencil on paper work by Louise Bonnet.

This was to be [Man Ray][0]'s final studio; he lived here for the rest of his life, right up until his death, in 1976. Rue Férou was the most improvised and personal studio of the artist's life. He m

The line between art and jewellery has become increasingly blurred since the 20th century, when modernist artists like Meret Oppenheim, Salvador Dalí, Max Ernst and Man Ray began exploring the possibi

In the autumn of 1940, Man Ray met a travelling tie salesman at a party in New York. The American artist had arrived back in the US earlier that summer, having spent nearly two decades in Paris. The s

Be among the first to know when new artworks and exhibitions by Man Ray are added to Ocula.
Sign Up Login