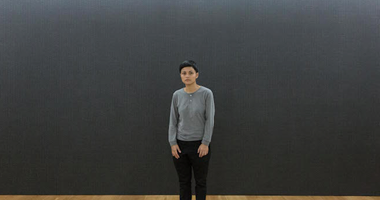 Maria Taniguchi is best known for her ongoing series of labour-intensive 'brick paintings' that are made of repetitive patterns of grey-black rectangles. For the paintings, which are all untitled and unnumbered, Taniguchi first draws out a grid, then fills one 'brick' at a time over a period of months on the floor of her Manila studio. While the works differ in size, the content—or lack thereof—always remains the same. Yet each painting is slightly unique in its distributions of minor gradations within the grid (some cells are near-black, while others appear as a washed-out grey)—a result of the differing amounts of water and pigment on Taniguchi's brush at any given time. Revealing the hand of the artist and the associated connotations of labour in what at first appears to be mechanically produced, the differing densities are largely unplanned and heighten the illusion of textural space. At a glance, the paintings may resemble the grid structures of densely populated urban spaces or sombre memorial monuments. Taniguchi resists calling the paintings meditative however, and instead considers them more of a record of passing time and a means of regulating her own production.

Taniguchi is also known for her poetic and somewhat abstract videos of objects with connections to the craftsmanship and history of the Philippines. For the video Untitled (Dawn's Arms) (2011), Taniguchi engaged a Filipino marble craftsman to remake the arms of a sculpture at the Mies van der Rohe Pavilion in Spain. Shots of the process are interspersed with footage of the jungle on the island of Romblon, while a black-and-white photograph of the resultant arms accompany the video. The work was notably featured in the 2016 exhibition Oceanic Feeling at ICA Singapore alongside works by Sriwhana Spong. Similarly focusing on lush vegetation, Taniguchi's 2012 video Figure Study shows workers digging for clay in a dense jungle, with cicadas and the clanking of their shovels audible. In a 2013 group exhibition at the Museum of Contemporary Art and Design in Manila, Taniguchi presented the video alongside slabs of clay—fired by her mother—that mimicked the shapes of the monitor.

In addition to painting and video, Taniguchi has also engaged in printmaking, though her familial and academic background is in sculpture. The artist comes from a family of sculptors and she earned a BFA in sculpture at the University of the Philippines, and an MFA at Goldsmiths in London in 2009. Along with artist Pio Abad, Taniguchi launched Telenovela, an exhibition platform dedicated to presenting the work of forgotten Filipino artists. In 2011, she received an Ateneo Art Award for her solo exhibition Echo Studies (2011) at the Jorge B Vargas Museum and Filipiniana Research Center in Quezon City and in 2015 she won the Hugo Boss Asia Art Award, which launched her to even greater international acclaim.

Between 6 and 15 May 2021, Art Fair Philippines shifts entirely online with 43 international exhibitors.

Since 2011, Joselina Cruz has been the director and curator of the Museum of Contemporary Art and Design (MCAD), De La Salle-College of Saint Benilde, Manila, which is celebrating its tenth anniversar

The way I paint, is on the floor; there's a layer of grey and then the brick matrix is drawn on with pencil. I go from one end to the other. Painting out like a printer, row by row.

Earth-stuff goes through myriad transformations on its path to usefulness in our world. Soil, stone, water, oil, plants, animals, and the rest all pass through processes of cleaning, smoothing, separa

In the brightly lit side room of Galerie Perrotin, five of [Maria Taniguchi][0]'s brick paintings line two walls, creating a stark visual contrast of black on white against the gallery's expansive vie

Oceanic Feeling  was the first major survey of the decade-long practices of New Zealand artist Sriwhana Spong and Filipina artist Maria Taniguchi, whose marked oeuvres both consider the temporality of material, and intersect in the way that they each focus on the act of making, creating awareness of artistic processes and intentions, which...

Borders between traditions and mediums blur in Sriwhana Spong And Maria Taniguchi: Oceanic Feeling, a rich and vivid exhibition of works from the two artists. The exhibition at Lasalle's Institute o

Be among the first to know when new artworks and exhibitions by Maria Taniguchi are added to Ocula.
Sign Up Login