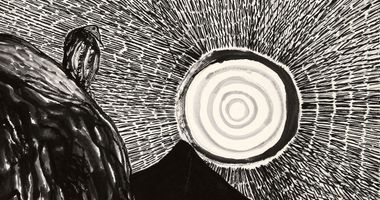 Born in Toronto, Canada, Wong lived with his parents in Hong Kong for eight years before returning with them to Canada in part due to medical needs. In 2007 he attained a BA in cultural anthropology at the University of Michigan. It was only in 2009 that Wong began to embrace art, first taking an interest in photography.

After completing an MFA at the City University of Hong Kong's School of Creative Media in 2010, Wong's interest shifted from photography to drawing. The artist's first works involved pouring ink onto cheap sketch pads, which he developed into distinctive oil and watercolour paintings by educating himself through online group discussions with artists and perusing books on the Old Masters.

Several critics have placed Matthew Wong as a descendant of some of these Old Masters, invoking such figures as Jean-Baptiste-Siméon Chardin, Vincent van Gogh, and Edvard Munch, and movements like post-impressionism, fauvism, and abstract expressionism.

Matthew Wong's paintings depict vibrant and mythical forest scenes, landscapes, and interiors drawn from the imagination and vague recollections. Painted in bright fauvist colours, his complex, dappled, dazzling compositions verge on the abstract. Wong contrastingly combines wet and dry brush work when mark-making, and—daubs of colour co-exist with thin strips and dots in a synthesis of art historical precedents in his work.

Several of Wong's works present a small lone figure or lone structure as in the anonymous entity by the well in The Realm of Appearances (2018) and the small cottage in Starlight (2019). Almost consumed by the vast and vivid scenes they inhabit, they tenuously tether the painting to figurative representation and anchor the viewer within the scene. This also underlines a distinct sense of isolation and melancholy that exists within Wong's works as art critic Eric Sutphin once observed in Art in America: 'his works, despite their ebullient palette, are frequently tinged with a melancholic yearning.'

Since his first breakthrough in 2015 with a solo show at Hong Kong Visual Arts Centre, Matthew Wong's work has increasingly drawn attention from collectors and critics. Wong's legacy continues to grow after his death in 2019, with posthumous gallery shows in New York and setting record prices in auction sales.

Be among the first to know when new artworks and exhibitions by Matthew Wong are added to Ocula.
Sign UpLogin