Who Is Auction Juggernaut Matthew Wong?

The result topples the previous record set by Christie's in October, when Shangri La (2017) sold for US $4.5 million, more than six times the high estimate and 'entering surreal territory', according to Artnet News. A previous record was set in June when The Realm of Appearances (2018) beat its estimate by more than 22 times, selling for $1.8 million at Sotheby's.

Wong's works have gone up in price more than two hundredfold since his debut show in New York in 2018. Held at Karma, the show garnered praised from both New York magazine's Jerry Saltz and New York Times critic Roberta Smith. However, it was after the artist ended his life in October last year, aged just 35, that Wong's prices began to enter the stratosphere.

Once an artist has died, 'that means a finite pool of material,' explained Emily Kaplan, a senior specialist in postwar and contemporary art at Christie's, in an interview with the New York Times in September.

Wong was born in Toronto and grew up in Hong Kong. He didn't pursue art with any seriousness until 2013, but he quickly made up for lost time, sharing his nascent practice on social media and creating over 1,000 works, many of which feature a lone, melancholy figure.

According to his mother, Wong was on the autism spectrum, had Tourette's syndrome, and had struggled with depression since childhood.

'He would just tell me, "You know, Mom, my mind, I'm fighting with the Devil every single day, every waking moment of my life,"' she said. 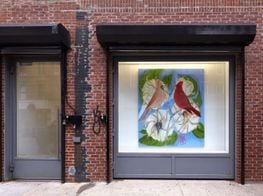 Founded in 2011, Karma represents a multi-generational roster of artists. The gallery hosts about twenty exhibitions each year, many of which are accompanied by Karma-published monographs and artist books. Karma amplifies its reach with its