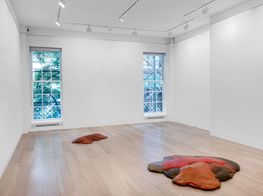 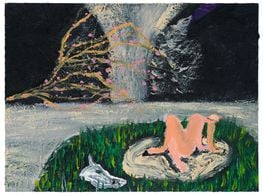 Since Matthew Wong's heart-breaking passing in 2019, aged just 35, the market for the Canadian artist's lucid, vibrant, and melancholic paintings has reached stratospheric heights. In 2020—the first year his works reached auction—aggregate total sales for his paintings reached a staggering $24.7 million.

Most notably, a vivid landscape named River at Dusk (2018) sold for $4,871,441 at Phillips, Hong Kong, according to the recently published Artnet Intelligence Report, the fourth-highest price achieved by an ultra-contemporary artist (b. post-1974), closely following Dana Schutz and Adrian Ghenie.

Wong, who braved Tourette's syndrome, battled with depression, and was on the autism spectrum, rose to prominence at hyper-speed, achieving wide-spread curatorial recognition and international acclaim for his careful, surrealistic landscapes.

Roberta Smith, The New York Times co-chief art critic, named him 'one of the most talented painters of his generation.' Footprints in the Wind, Ink Drawings 2013–2017, Wong's first solo exhibition with New York's Cheim & Read gallery (5 May–11 September 2021), focuses on a body of work yet to be given a spotlight: the artist's monochrome ink drawings on rice paper—all on display for the first time.

Drawing was the artist's first foray into fine art following a seemingly unconventional path into the arts. He graduated with a cultural anthropology degree from the University of Michigan in 2007, followed by a photography degree in Hong Kong, where he lived intermittently for his whole life.

Disillusioned with photography, Wong began to experiment with ink and paper—wholly teaching himself the craft through careful study of Asian, American, and European masters, concurrently developing personal relationships with artists, curators and poets on social media—including gallerist John Cheim, who supported his earliest artistic efforts.

Wong's layered, intense mark-making has been described as 'psychedelic pointillism', and comparisons of his painterly approach have been made with artists as seemingly diverse as Yayoi Kusama, David Hockney, Van Gogh, Louise Bourgeois, and Edvard Munch. The emotional charge of the 24 ink paintings on display is clear. Works such as Untitled (2015), carry a fragile, intense energy as hooded, faceless figures lurk in a shadowed landscape.

Writer John Yau has previously explained how these figures, 'disturb the landscape, can be read as surrogates for the artist working his way through the landscape of art; he is both embedded in the paint and having a dialog with it.'

Dramatic works like The Watcher (2017) present an intense duality between lightness and darkness—evocative of both traditional Chinese painting and woodblock printing. In 2020, Wong's parents donated a similarly constructed drawing, Garden with Cosmic Vase (2016), to The Metropolitan Museum in New York.

Reflecting on his tangibly emotive work, Wong once said, 'I do believe that there is an inherent loneliness or melancholy to much of contemporary life, and on a broader level I feel my work speaks to this quality in addition to being a reflection of my thoughts, fascinations and impulses.'

Later this year, Wong is due to receive a major solo exhibition at his native Art Gallery of Ontario, Toronto, organised by Julian Cox, the museum's Deputy Director and Chief Curator.—[O] 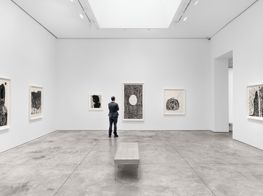