Most remembered for his satirical dot paintings of communism and capitalism, Sigmar Polke tested the boundaries of painting and examined contemporary culture through a playful and experimental gaze. The German artist was born in Oels, Germany (now Oleśnica, Poland) and raised there until his family moved to Thuringia, Germany in 1945. Following the rise of the communist regime in East Germany, however, the Polkes relocated to West Germany in the mid-1950s. Polke spent the last three decades of his life in Cologne and taught at the University of Fine Arts of Hamburg from 1977 to 1991.

Polke's early works are often associated with Capitalist Realism (Kapitalistischer Realismus), a movement he founded in 1963 with fellow students Gerhard Richter and Konrad Lueg at Kunstakademie Düsseldorf. Capitalist Realism referenced Socialist Realism—the state style promoted in the communist East—and also critiqued Western commercialism as visualised in American Pop art. The Sausage Eater (Der Wurstesser) (1963) depicts an individual holding the end of a long chain of frankfurters. The individual's lack of eyes and brain, and the exhausting length of sausages hint at state control feeding its citizens with dogma.

Polke frequently used common subjects such as socks and biscuits and, in Schokoladenbild (Chocolate Painting) (1964), notably, a half-unwrapped chocolate. Through the absence of labels or brand names, Polke could expose the banality and actual value of commodities so celebrated in Andy Warhol's Campbell's Soup Cans (1962). Moreover, in what came to be known as his signature 'Polke dots', he created figurative paintings after the works of Roy Lichtenstein. However, in Bunnies (1966)—a depiction of four young women in Playboy Bunny costumes—Polke's dots were hand-painted to deliberately provoke mistakes, in comparison with Lichtenstein's precise and uniform screened Ben-Day dots. Consciously producing images that were seen as puerile and crude, Polke made light-hearted parodies of both communism and consumerism.

Polke's playful satires continued to undermine the conventions of painting past the end of the 1960s. Kathreiner's Morning Wood (Kathreiners Morgenlatte) (1969–1979) is a painting in the broadest sense, with images collaged onto canvas and other fabrics, and an interior view of a room painted in acrylic. To further destroy traditional easel painting, Polke cut the wooden stretcher into pieces and attached the pieces onto the work's surface. He signed it 'Henri Matisse', thereby poking fun at the presumed significance of an artist's signature and revealing the difficulty of being original in contemporary times. Negative Value (1982)—exhibited in documenta 7 (1982)—redefined the relationship between the painter and the viewer. Using burnish that makes colours change from different angles and under different lights, Polke entrusted the viewer with their individual interpretation.

From the second half of the 1980s on, Polke explored ideas of transparency and alchemy. He created transparent panoramas in his 'Laterna Magica' series (1988–1990) by painting a set of seemingly unrelated images on both sides. Ranging from ancient glyphs to cartoons from 18th-century folk woodcuts, the images overlapped with a horizontality that suggested an absence of hierarchy in diverse cultures and histories. In his 'Axial Age' paintings (2005–2007), on the other hand, Polke painted a mixture of abstract and figurative images with varnishes, pigments, photographic chemicals, lapis lazuli and minerals that included gold, silver and malachite. The title refers to the 'axial period' from the works of the philosopher Karl Jaspers, who maintained that the period between 800 and 200 BCE marked the pinnacle of ancient civilisations. Polke's fascination with transparency began in his late teens when he worked as an apprentice in a stained glass factory in Düsseldorf. Drawing on the ancient practices of glassmaking and alchemy, and informed by his later travels to different parts of the world, he synthesized a visual history of mankind.

Polke received several international prizes during his lifetime, notably the Roswitha Haftmann-Preis (2010); the Praemium Imperiale (2002); the Carnegie Prize (1995); and the Venice Biennale's Golden Lion Prize (1986). His works are in the collections of Walker Art Center, Minneapolis; The Museum of Modern Art, New York; Tate, London; and the J. Paul Getty Museum, Los Angeles. His estate is represented by David Zwirner, New York. 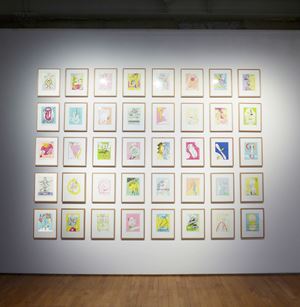 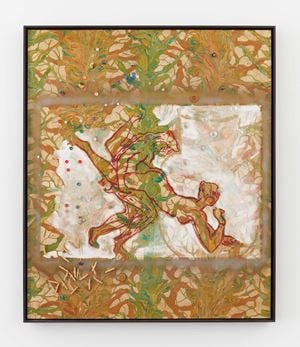 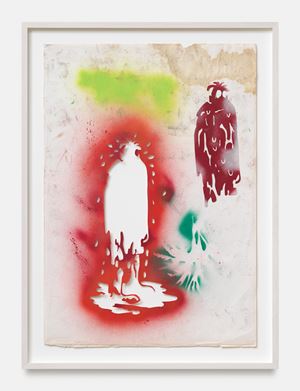 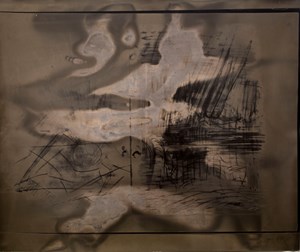 'A faint, beautiful memory' is how curator Norman Rosenthal described A New Spirit Then, A New Spirit Now, 1981-2018, the current show at Almine Rech Gallery on the Upper East Side. What he’s rememb

Outside of the fairs this week, don't miss the exhibitions on view at Basel's tops museums and institutions, including Wolfgang Tillmans, Wim Delvoye, Jérôme Zonder, Yan Xing and Richard Serra, amongs

Sign up to be notified when new artworks and exhibitions by Sigmar Polke are added to Ocula.
Sign UpLogin