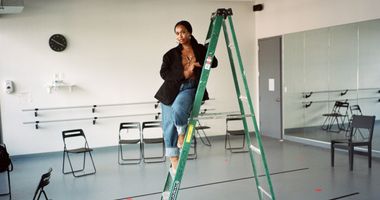 Ocula News Tschabalala Self on Her Play for Performa, ‘Sounding Board’ Read More

American artist Tschabalala Self creates paintings, prints, sculptures, and animations that open up a range of topics, including attitudes towards the gendered and racialised body. Self's depictions of the body are made up of shapes, pieced together using processes such as sewing, stitching, and printing, referencing craft and artistic traditions. Through collage and assemblage, the artist creates 'new ways for audiences to see and perceive the body', as she explained in her Ocula Conversation with Jareh Das.

This plurality challenges singular views towards the black female body, reclaiming it within a space where new narratives can be formed. Self, who was born in Hamilton Heights in Harlem in 1990, draws much of her imagery from her life experiences. The resulting scenes exist within half-real, half-imaginary spaces that reference characteristic elements of New York, such as bodegas—small corner stores that were originally set up by Puerto Ricans and Dominicans in the 1940s and 50s. In 2018, Self's exhibition, Bodega Run, in Shanghai at the Yuz Museum included a series of paintings that focus on the role of bodegas as social spaces for people of colour, and where wealth disparity is rendered visible through the sale of cheap, processed or canned foods that can be purchased in exchange for food stamps. By focusing on bodegas, Self makes broader statements about wealth disparity in the United States. As the artist has stated, 'The bodega is and was a space created for people of color by people of color, to serve the needs of communities of color. A hood menagerie, the bodega is emblematic of black metropolitan life.'

Urban life has been a key focus throughout Tschabalala Self's practice, visible in her 2020 solo exhibition at the Institute of Contemporary Art, Boston, titled Out of Body. The exhibition contained paintings and sculptures featuring her signature 'avatars', each one an imaginary inhabitant of her hometown, Harlem. Representing figures that are predominantly female in her practice, Self expresses that the 'fantasies and attitudes surrounding the Black female body are both accepted and rejected' in order to represent 'a body which is both exalted and abject.'

Self, who received her BA from Bard College in 2012, followed by an MFA in Painting and Printmaking from the Yale School of Art, cites her mother—who sewed as a hobby and ran a trade programme at Bronx Community College—as a key influence on both her formal and conceptual approach to making art. Her use of textiles is connected to her focus on Black female bodies, 'which have a variety of hair textures, tones, and forms', she has explained. More recently, the artist has transitioned from representing lone figures to pairing her avatars to 'define the boundaries of their personality and the extent of their community.'

View All (8)
Ocula News Tschabalala Self on Her Play for Performa, ‘Sounding Board’ New York, 29 October 2021

In the play, Self treats dialogue as a material for collage, reworking it to elicit new meanings.

Read More
Ocula Conversation Tschabalala Self: 'We must abandon the lies and mistruths we have been told' By Jareh Das, New York City

Few notions so frustrate the liberal imagination as that of the 'body'. Despite its rhetoric dominating our literature and visual culture, the term prompts a sense of corporeal ensnarement, unease and

If you're just finding out about the artist Tschabalala Self—who, at 29, already has already established both industry cred and a cult following—it's more likely than not a little late for you to ac

SEATTLE — Scraps of bright turquoise, yellow, and salmon fabric encircle a swatch of denim imprinted with a building's image; this delineates a figure's thigh. It is part of up Bellyphat (2016), a

Be among the first to know when new artworks and exhibitions by Tschabalala Self are added to Ocula.
Sign Up Login