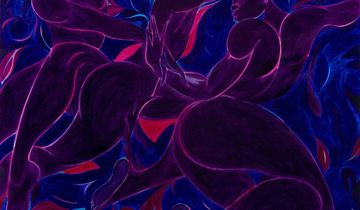 Using painting as a means to pay homage to his Yoruban ancestry and its attendant folklore, Tunji Adeniyi-Jones employs a vivid palette and an expressive treatment of the body within a flattened picture plane to present a distinctly West African take on modernism.

Born in 1992 to Nigerian parents in London, Tunji Adeniyi-Jones received a BFA from The Ruskin School of Art at Oxford University in 2014 and an MFA in painting and printmaking from the Yale School of Art in 2017.

In his work, Adeniyi-Jones pays homage to his heritage whilst also considering idolatry and myth from his perspective in the African diaspora. Also shaped by travel, movement, and cultural hybridity, his practice expands on cultural themes detailed in the works of novelists Chinua Achebe and Wole Soyinka, as well as by the artist Ben Enwonwu—widely regarded as the pioneer of African modernism. Adeniyi-Jones draws from each of these legacies to call attention to the rich substance of West African history, philosophy, and mythology.

In his paintings, opulently proportioned and flattened figures with mask-like faces stand in for deities, dancers, and lovers. These figures emerge from lushly patterned backdrops as if summoned from memory; tessellating arrangements become undulating bodies in shallow fields of colour, depicted in various postures of exaltation, tranquility, and tenderness. Adeniyi-Jones believes that these portrayals are able to transcend linguistic barriers by embodying the universal language of movement.

In a 2020 interview with Destinee Ross, Adeniyi-Jones explained: 'There are thousands of different dialects spoken across West Africa, but one of the most unifying languages is communicated through the body. This language of dance and performance transcends all cultural boundaries and my intention is to charge the bodies in my paintings with this same vigour.'

Working primarily in oil on canvas to create large, multi-panel paintings, Tunji Adeniyi-Jones often also makes studies in ink pen or watercolour on paper as part of his process. While artworks like Red Twins (2016)—a vivid portrayal in oil of two scarlet-red, Matisse-like figures against a complementary green jungle—exemplify his large-scale painting practice, monotype prints like the 2018 series 'Dancing Figure' provide an intimate glimpse into the artist's process, demonstrating how he maps out the curves of his figures. Depicting androgynous bodies in rusty red and rich magenta, a selection of Adeniyi-Jones' small studies was exhibited in the artist's solo exhibition Works on Paper (2019) at Nicelle Beauchene Gallery in New York.

In 2021, Tunji Adeniyi-Jones set a new auction record at the Phillips London Evening Sale with his oil painting, Love Ritual (2019)—a seductive depiction of two black and purple figures entangled in an embrace—fetching a price four times its estimate. Shortly thereafter, White Cube gallery announced their representation of the young artist, reinforcing his reputation on the international contemporary art stage. In the same year, the artist was also included in Young Gifted and Black: The Lumpkin-Boccuzzi Family Collection of Contemporary Art, which travelled across the United States and featured his painting, Blue Dancer (2017), on the cover of the exhibition catalogue.

In 2020, Adeniyi-Jones was selected for Kehinde Wiley's Black Rock residency in Dakar, Senegal. The artist will hold his first solo exhibition at White Cube in late 2021.