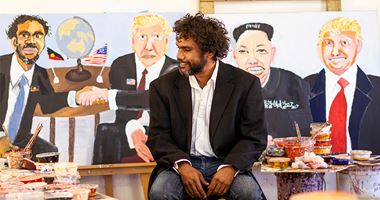 With humour and wit, Vincent Namatjira explores the complex issues of colonial history and its living consequences on Aboriginal Australians in his bold and dramatised portraits.

Born in Alice Springs, Namatjira was sent to live with foster families as a child when his mother passed away in a car accident. After finishing high school, he returned to Hermannsburg to join his extended family and began reconnecting with his Western Aranda heritage. Painting, which he picked up in 2011, became one way of exploring his family history, and his humorous portraits of historical figures garnered attention in 2014 when the Queensland Art Gallery purchased all of the works presented in a solo exhibition at Marshall Arts, Adelaide (now Galerie Zadra).

Painting with broad strokes in acrylic, Namatjira often exaggerates the physical features or expressions of his subjects to create portraits that appear to dilute the seriousness of history, distilling the power dynamics of the historical moment with his use of humour. Recurring characters include Captain James Cook, members of the British royal family, and politicians, many of whom appear in the series of paintings Namatjira submitted in Sydney Contemporary 2017 to show with THIS IS NO FANTASY dianne tanzer + nicola stein. Standing in groups of two or three, the historical and contemporary figures are rendered with oversized heads or slanted faces, such as the stern-looking Barack Obama and Donald Trump in Mr Obama and Mr Trump (2017). Namatjira also frequently inserts himself in his works; in Captain Cook with the Queen and Me (2017), the artist's broad smile and informal gesture—with arms thrown over the shoulders of the other two on his sides—contrast with the rather surprised faces and stiffly hunched backs of the Captain and the Queen. In an interview with Ocula in 2016, Namatjira explained that he is drawn to figures of power because of their seeming disconnection from the more remote parts of the world such as the Aboriginal community in which he lives. Yet, as leaders and decision makers, their impact has been and continues to be felt internationally. By distorting his subjects in the manner of a caricaturist, Namatjira lifts the figures of power from their zones of influence and strips them of dominance traditionally accorded to them.

Another pivotal figure who frequents Namatjira's paintings is his great-grandfather Albert Namatjira, the celebrated watercolour painter, who was the first Aboriginal person to be granted restricted Australian citizenship in 1957. Albert has been an inspiration for the artist since the onset of his career; in a 2018 interview with Ocula, he observed that his great-grandfather's contribution to their country made him determined to find his own path, 'and not follow anybody else's'. Namatjira has dedicated several works to the elder Namatjira, notably Rex Batterbee and Albert Namatjira (2018), which pictures the two significant Australian watercolourists and close friends side by side before a vast landscape that they painted. In 2018, Namatjira was a finalist for the prestigious Alice Art Prize for this painting. The series of paintings purchased by the Queensland Art Gallery in 2014 also included depictions of his great-grandfather.

Working from his studio Iwantja Arts at Indulkana in the Anangu Pitjantjatjara Yankunytjatjara Lands, South Australia, Namatjira is equally devoted to addressing Australia's colonial history and its ongoing consequences as well as celebrating Aboriginal communities in his paintings. For the TarraWarra Biennial 2016: Endless Circulation, for example, he created a series of portraits of the seven prime ministers who had served during his lifetime and whose policies determined the lives of Aboriginal Australians. Between 11 November 2018 and 3 February 2019, Namatjira participated in the group exhibition Weapons for the Soldier at Hazelhurst Regional Gallery, which attempted to shed light on the forgotten stories of Indigenous men who fought for their land. He presented a six-panel work, painted on army materials, each depicting an anonymous Aboriginal soldiers. Namatjira also honoured Aboriginal celebrities and leaders in the series 'Legends', included in his solo show Legends at THIS IS NO FANTASY dianne tanzer + nicola stein in Melbourne in the summer of 2018, which showed portraits of singers Archie Roach and Gordon Bennett, political activist Eddie Mabo, and footballer Nicky Winmar, among others.

Namatjira has exhibited internationally, including at the 9th Asia Pacific Triennial of Contemporary Art (2018-2019); Art Basel in Miami Beach (2018); Tarnanthi Festival of Contemporary Aboriginal and Torres Strait Islander Art at the Art Gallery of South Australia (2017); the 10th Mildura Palimpsest Biennale (2015); and the British Museum, London (2015). His works are also in the collections of the British Museum; Queensland Art Gallery; Flinders University Art Museum; and Artbank. 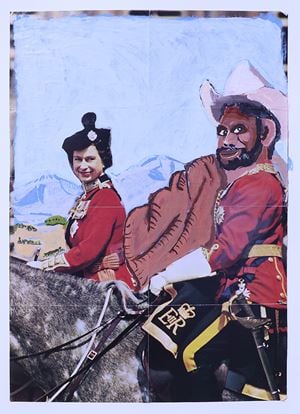 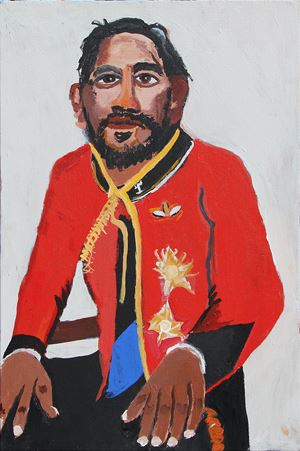 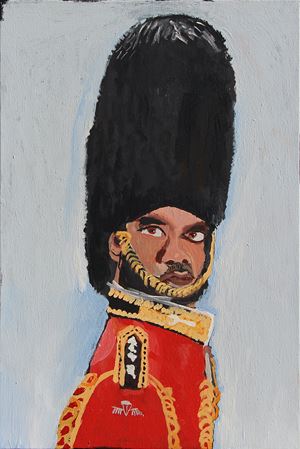 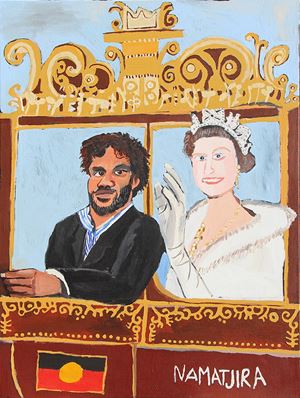 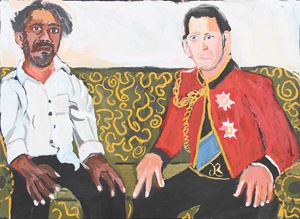 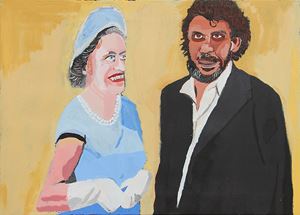 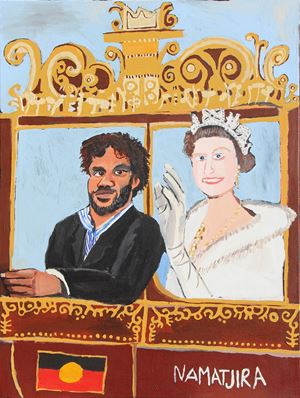 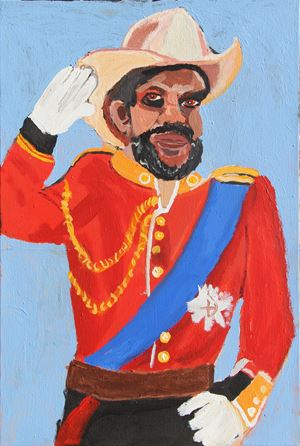 The South Australian sculptor won AU $100,000 for her work 'Edges of Excess'.

[Vincent Namatjira][0] relishes painting famous people who are humorously redeployed across vivid canvases and depicted in his community in remote Indulkana in South Australia. His powerful paintings

Nothing is what it used to be in the group show Just Not Australian. This is probably just as well, since the cultural artefacts that form much of the show's raw material are not always pretty. In w

It came as a serious shock to me when I rounded a corner at Art Basel Miami Beach, the world's largest contemporary art fair, and came face-to-face with Donald J. Trump.

On New Year's Eve 1915, 31-year-old William Joseph Punch from North Queensland joined up and went to war. Sent to northern France he was wounded twice, finally ending up in a military hospital in Br

Vincent Namatjira and Kamurin Young are two of the "youngfellas" who belong to one of the most remote artistic collectives on earth, spanning a vast proportion of central Australia, larger than many E

Sign up to be notified when new artworks and exhibitions by Vincent Namatjira are added to Ocula.
Sign UpLogin