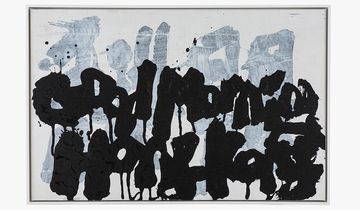 Trained in the tradition of Chinese calligrapy, Yang Jiechang notes that this formative experience, and his career in the Red Guard, gave him a strong sense of local identity as a Catonese artist. As a hotbed for revolutionaries and social reformation, the identification of Canton as an epicentre for cultural production remains central to Yang's practice. Selected for the Magiciens de la Terre (1989) exhibition at the Centre Pompidou, Yang now works across video, sculpture, and installation as well as traditional ink painting. His works attempt to reintroduce Canton as an alternative to the Madarin oriented history of China. This is particulary relevant as the regulation and representation of Chinese culture becomes increasingly fraught.

Currently living between Paris and Heidelberg, Yang infuses local references and literati painting concerns with a wider, Western art historical narrative. His works priviledge process as an end result whilst also challenging normative viewing expectations. His works seek to subvert claims on cultural genealogy and reposition diverse artistic threads.Yang recently participated in Ink Art: Past as Present in Contemporary China (2013), an exhibition at the Metropolitan Museum in New York and has exhibited extensively across France, China and the Netherlands.

Be among the first to know when new artworks and exhibitions by Yang Jiechang are added to Ocula.
Sign Up Login