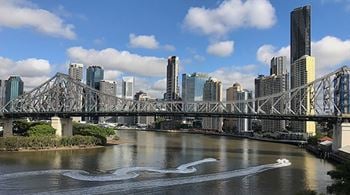 Brisbane/Meanjin is situated on the winding Brisbane River, the traditional home of the Turrbal and Yugara peoples who have been living there for over 60,000 years. The capital of Queensland, it is Australia's third largest city with a population of 2.5 million. The energy and depth of its many visual arts activities is generally widely under-estimated.

Queensland Art Gallery and the Gallery of Modern Art (QAGOMA) is the state gallery, and the cultural precinct spans two buildings in the city's cultural precinct at Southbank. The institution has made its mark internationally through the iteration of the Asia Pacific Triennale, which began in 1993. Both discourse and building a collection are a focus of the Triennale; and in each three-yearly iteration, the curatorial frameworks give way to fresh new voices that attract a global audience.

The Institute of Modern Art, Brisbane (IMA), is one of Australia's oldest contemporary art spaces. The IMA is a non-collecting art institution that is committed to the innovative practices of international, national and local artists that are often commissioned to create new bodies of work as milestones for their professional careers. The institution has a strong commitment to experimental curatorial practice, including discourse building through public programs and publishing. Celebrating its fortieth year in 2017, the institution is now stronger than ever with the launching of its new Belltower Gallery.

2020 marks the forty-year history of Metro Arts, the multi-discipline arts venue currently positioned in the central business district in a heritage-listed building. Hosting a gallery and theatre complex, their programming is determined by an open call process facilitated through a core team that also oversees the hire of studio spaces and larger community spaces.

Nearby is the Museum of Brisbane, the city museum operated from the city hall building in the centre of Brisbane's central business district. Museum of Brisbane presents local visual artists alongside designers, architects, social historians, and technological developments through exhibitions aimed at a wide public. It has an artist in residency program, and this year the Museum launched BAD, the Brisbane Art and Design festival that runs for seventeen days.

Artisan is a non-profit art, craft and design centre that has been active for almost fifty years. It recently moved to its new location in King St, Fortitude Valley and features a Reko Rennie artwork on the façade of the building.