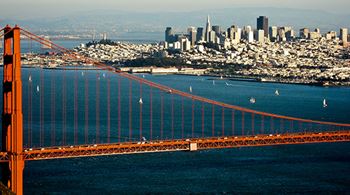 Despite being home to a tech boom that has skyrocketed rents out of reach for even six-figure-salary programmers, San Francisco continues to host a healthy, well-rounded art scene, with many major arts institutions and non-profits dotted across the city.

In the east of the City by the Bay, Dogpatch has not been touched by gentrification until relatively recently. An historically industrial neighbourhood cut off from the rest of the city by an interstate highway, Dogpatch is now a creative hub where you can find institutions such as the Minnesota Street Project, which hosts galleries, artists, and other not-for-profit spaces across three warehouses. Down the block from the Minnesota Street Project is the McEvoy Foundation for the Arts (MFA), a relatively new institution centred around the McEvoy Family Collection. Though initially an exclusively photography collection, it has expanded to media of all kinds and includes the work of heavy hitters such as Diane Arbus, Alex Katz, and Wayne Thiebaud.

West of Dogpatch is the Mission District—the centre of San Francisco's nightlife and host to a range of galleries. In this neighbourhood, the non-profit Southern Exposure (SoEx) is dedicated to supporting artists of the Bay Area and beyond. Nearby, KADIST—another non-profit—is focused on the development of contemporary art through collaborations with artists, curators, and other organisations. The KADIST collection holds a wide range of contemporary artworks, and the foundation also has a hub in Paris. Residing alongside these institutions in the Mission District are dealer galleries such as Hosfelt Gallery, Catharine Clark Gallery, and Ratio 3. Northwest in the NOPA neighbourhood (an abbreviation of North of the Panhandle) is CULT | Aimee Friberg Exhibitions—a dealer gallery with an extensive and expansive public programme that includes but is not limited to dinners, tours, talks, and offsite exhibitions.

North of Dogpatch and the Mission District is San Francisco's lively SoMa neighbourhood. An abbreviation of 'South of Market [Street]', SoMa is the city's SoHo-esque hub. Northern SoMa is home to the San Francisco Museum of Modern Art (SFMOMA)—one of the largest museum of modern and contemporary art in the country. Across the street from SFMOMA is the Yerba Buena Center for the Arts (YBCA), which supports art committed to social change, and around the corner is San Francisco's local chapter of dealer gallery Gagosian.

In southern SoMa, the core mission of SOMArts—like the YBCA—is to support socially conscious art. SOMArts facilitates programmes by and for marginalised artist communities, including annual themed exhibitions such as The Black Woman is God, which focuses on spirituality in the African diaspora. Further south of SOMArts, in Protrero (between Dogpatch and the Mission District), is the CCA Wattis Institute for Contemporary Arts. An exhibition venue and research institution attached to the California College of the Arts, the Institute describes itself as a 'laboratory for testing the future of contemporary art' and is home to a cutting-edge programme of experimental works.

North of Market Street, the Tenderloin neighbourhood is the least gentrified area of the city, and is home to the Jessica Silverman Gallery and the unconventional artist-run publication THE THING Quarterly, amongst other galleries and institutions. North in Chinatown are the experimental contemporary art galleries CAPITAL and Et al., and rounding out the range of art programmes the city has to offer, Art Market San Francisco arrives each April with contemporary and modern works offered by local, national, and international galleries.