The auction house announced a series of events championing the return of art to its rightful owners, commencing with an exhibition opening in Paris on 27 January.

In December 1998, the U.S. Department of State and the U.S. Holocaust Memorial Museum gathered representatives from 44 countries and 13 NGOs to address Nazi art theft from 1933–1945.

They established the 11 Washington Principles on Nazi-Confiscated Art, which together form a strategy for identifying confiscated art and restoring it to its pre-war owners.

To mark the 25th anniversary of this action, auction house Christie's has announced a programme of events in support of art restitution, beginning with a Paris exhibition by French artist Raphaël Denis. Installations will form a 'fragmentary reconstitution' of artworks taken from French jews.

Other events include a talk by Los Angeles restitution lawyer Randy Schoenberg about the case of Gustav Klimt paintings once owned by the Czech sugar magnate Ferdinand Bloch-Bauer, and a panel discussion on emerging trends in provenance research in London. 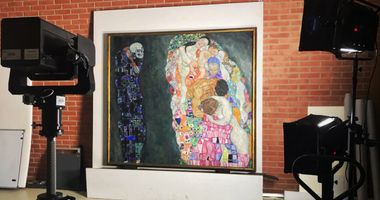 The question of provenance remains pertinent in 2023, with museums around the world facing new scrutiny into the origins of their collections.

'The Washington Principles bent the arc of the art world toward ensuring that family histories and the provenance of objects would be unearthed and preserved, and new paths to the resolution of ownership questions could be opened and pursued,' said Marc Porter, Chairman Christie's Americas.

'The Washington Principles are the very bedrock of the work that Christie's Restitution team has done for many years: research into the 1933-1945 ownership history of artworks that Christie's plans to offer for sale,' added Richard Aronowitz, Christie's Global Head of Restitution.

'When we discover a loss, or a malign change of ownership, or a forced sale that was not addressed and remedied after World War II, the Washington Principles gives parties the framework to address these issues, even many decades after they occurred.'

'Three factors explain this performance,' said Christie's CEO Guillaume Cerutti: 'the resilience of the art and luxury markets, the remarkable success of several major art collections—including the unforgettable Paul Allen sale—and the expertise and hard work of our teams around the world.' —[O]