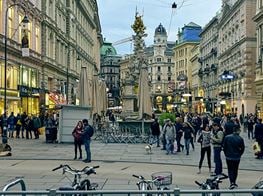 The AI effort is part of a major online retrospective devoted to the Austrian symbolist that includes interactive essays, newly digitised work, and an augmented reality exhibition.

Gustav Klimt's 'Faculty Paintings' were stolen by Nazis and destroyed by fire in the final days of World War II. With only black and white photos of the works remaining, it's unclear how the paintings were coloured.

Drawing on a vast data set of Klimt's works, archival data, and scholarly research, Google Arts & Culture used Artificial Intelligence (AI) to generate their best guess at what the original paintings looked like.

'The result for me was surprising because we were able to colour it even in the places where we had no knowledge,' said Dr Franz Smola, curator at the Belvedere Museum, Vienna. 'With machine learning we have good assumptions that Klimt used certain colours.'

Klimt's 'Faculty Paintings' were representations of the faculties of Philosophy, Medicine, and Jurisprudence that the Austrian Ministry of Education commissioned for the University of Vienna.

Klimt had to hire a new studio to work on the paintings, each of which was over 13 feet (around four metres) tall. He completed them in the early 1900s.

The university ultimately rejected the paintings, which, instead of depicting a world bending to science and reason, showed it roiling with sex, death, and chaos. The works were sold privately before being stolen by the Nazis in 1938 and taken to the Schloss Immendorf castle for safekeeping.

Schloss Immendorf was set ablaze on 8 May 1945, presumably by the retreating German army, and the 'Faculty Paintings', along with numerous other works by Klimt, are believed to have been destroyed.

The machine learning project is part of a bravura presentation of the artist's work curated by Smola called Klimt vs. Klimt— The Man of Contradictions that launched online today.

Google Arts & Culture collaborated with 30 partners and institutions to present hundreds of paintings, drawings, letters and more, many of which have been digitised for the first time.

It includes interactive essays about dozens of works and themes in Klimt's paintings, hundreds of high-resolution images, and an Augmented Reality Pocket Gallery of 63 Klimt masterpieces, including the 'Faculty Paintings'. —[O]