Turner Prize-nominated art duo Cooking Sections helped develop a new menu for The Magazine, the Zaha Hadid-designed restaurant in London's Serpentine North Gallery. The menu accompanies the exhibition Back to Earth, a response to the ongoing climate crisis that runs from 22 June to 18 September.

Designed in collaboration with chef Tomas Kolkus and British catering company Benugo, who manage the restaurant, the menu focuses on regenerative agriculture. New menu items at The Magazine include 'British chickpea and spinach hummus on YQ sourdough' and 'bonfire potatoes with seaweed butter' washed down with 'seaweed sweepers'. (YQ, refers to Yield and Quality flour made from a field of wheat with genetically distinct individual plants as opposed to the typical genetic mono-culture.)

Cooking Sections, which comprises artists Alon Schwabe and Daniel Fernández Pascual, is launching the new menu at The Magazine as part of their ongoing 'Climavore' project, which began in 2015.

Taking inspiration from the origin of the word 'restaurant' — a French phrase meaning 'restorative soup'—the Climavore project seeks to make the restaurant a site for restoring and regenerating the world's ecology through regenerative eating practices.

Alongside restaurants in Skye and Raasay, food-serving museums across the UK, such as the Turner Contemporary, the Tate (all locations), and the Victoria & Albert Museum, have adopted Climavore menus. These replace farmed salmon with ingredients that can improve water quality and generate marine habitats like seaweeds, bivalves, and sea vegetables.

The culinary programme is just part of the multi-site activities taking place as a part of Back to Earth. Ecology-centred works on show in the adjoining Serpentine North gallery include a new sound and light installation by Brian Eno, a newly-commissioned film called The Family and The Zombie by Karrabing Film Collective, and an installation and sonic collaboration between Artes Mundi Prize-winning artist Dineo Seshee Bopape and animist and shaman Katy'taya Catitu Tayassu.

Artist Carolina Caycedo will envelop the exhibition space, with a wallpaper of collaged images of human-affected waterways across the Americas; while Norwegian scent artist Sissel Tolaas fills the air with a tailor-made score of smells.

A live programme will also accompany the exhibition and continue for the next two years. Highlights include: the UK premiere of the 2019 Venice-Golden-Lion-winning opera performance Sun & Sea at The Albany, in Lewisham, and the planting and monitoring of Alexandra Daisy Ginsberg's Pollinator Pathmaker in Kensington Gardens.

The Serpentine's Bettina Korek and Hans Ulrich Obrist said 'We are galvanised by the calls for change and creative solutions that have come to life through Back to Earth and hope that they inspire more.' —[O] 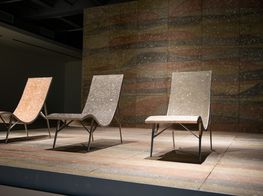 Cooking Sections is a collective founded in 2013 in London by Daniel Fernández Pascual and Alon Schwabe. The duo examines the composition of the world through food, engaging with installation, mapping, video, and performance. In 2020, the duo 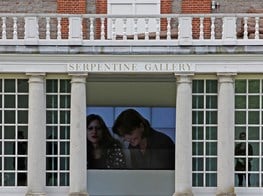 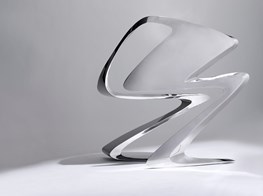 Zaha Hadid was an British-Iraqi architect recognised for her radical and innovative designs that left a lasting influence on the late 20th- and early 21st-century architecture. Upon graduating with a degree in mathematics from the American