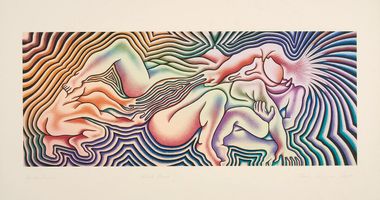 American artist Judy Chicago is regarded as a pioneer of the feminist art movement of the 1960s and 70s. Her multidisciplinary practice over the course of six decades has spanned painting, sculpture, installation, and education.

Born Judith Sylvia Cohen, Chicago began taking drawing classes at the age of five at the Art Institute of Chicago. She received her BA in 1962 and her MA in 1964 at University of California, Los Angeles (UCLA). During her time at university, Chicago became politically active and often designed posters for the UCLA National Association for the Advancement of Colored People (NAACP) chapter.

In 1965, Chicago held her first solo exhibition at the Rolf Nelson Gallery in Los Angeles. In the same year, she participated in a major minimalist exhibition at the Jewish Museum in New York City, where she was the only exhibiting woman in the four-person show.

Chicago legally changed her name in 1970 as a means to free herself from certain social identities attached to ethnicity and gender. She dropped the name 'Gerowitz', which she had acquired through her marriage to Jerry Gerowitz, who had died in a car crash in 1963. At her solo exhibition at the California State University at Fullerton, she celebrated her name change dressed as a boxer with 'Chicago' written on her sweatshirt. Chicago also installed a banner that read: 'Judy Gerowitz hereby divests herself of all names imposed upon her through male social dominance and chooses her own name, Judy Chicago.'

In the 1970s, Chicago began teaching full-time at the California State University in Fresno, where she developed the first feminist art programme in the country. Together with Canadian artist Miriam Schapiro, the artist then re-established the Feminist Art Program at the California Institute of the Arts alongside Womanhouse, the first public display of feminist art. Chicago also sponsored the Judy Chicago Art Education Collection, a living archive of feminist art education, at the Pennsylvania State University in the 1990s.

In 2021, after six decades of her artistic career, Chicago held a retrospective at the de Young Museum in San Francisco and exhibited approximately 130 of her paintings, prints, drawings, and ceramic sculptures, in addition to ephemera and several films.

Prior to her more direct interrogation of female bodily forms in the 1970s, Judy Chicago's minimalist paintings tested the limits of colour through 'self-designed diagrams, systems, and spatial patterning.'

Chicago's early artwork explored minimalism and played with geometric shapes and colour. Some examples of her work during this time include Sunset Squares (1965), where the artist painted various sizes of free-standing, square, plywood forms in pastel colours; Rainbow Pickett (1965), where rainbow-coloured plywood slabs lean against a wall; and Flight Hood (1965–2011), where a graphic painting created with vibrant colours has been sprayed onto a car hood.

The Dinner Party (1974–1979) is perhaps Chicago's most well-known artwork. This work involves a massive ceremonial banquet arranged in a triangle with 39 place settings, each side measuring 48 feet long. The table is set with embroidered runners, gold utensils, fine china, and motifs based on vulvar and butterfly imagery.

The Dinner Party commemorates important mythical and historical female figures including Virginia Woolf, Georgia O'Keeffe, Sojourner Truth, and Artemisia Gentileschi, among others. Beneath the table, the artist also etched the names of another 999 women on white floor tiles, representing a total of 1,038 women.

In 2018, Chicago released a line of plates inspired by select seats of The Dinner Party in collaboration with The Prospect NYC.

Between the 1980s and 90s, Chicago became interested in exploring the Holocaust as part of her enquiries into male power, powerlessness, and her Jewish heritage. Along with her husband, American photographer Donald Woodman, they embarked on an eight-year research project that culminated in an exhibition that travelled across museums in the U.S. between 1993 and 2002. This project involved a series of images that merged Chicago's painting and Woodman's photography, and tapestry and stained glass made in collaboration with artisans.

Judy Chicago is widely recognised and has exhibited internationally in gallery and museum shows.

Read More
Related Press The ones to watch at the first ever Frieze Los Angeles 13 February 2019, Tatler

February in LA has long been a permanent fixture in the calendars of the world's elite, who use awards season as a welcome excuse to escape the dreary drizzle in Europe and the biting cold on the East

Be among the first to know when new artworks and exhibitions by Judy Chicago are added to Ocula.
Sign Up Login