Alongside new work by Byron Kim, James Cohan's virtual presentation features a site-specific installation by Michelle Grabner, based on the artist's public commission for the new Art Preserve at the John Michael Kohler Arts Center in Sheboygan, Wisconsin, opening to the public in June.

Process is fundamental to Grabner's practice, which, since the artist graduated with an MFA in Art Theory and Practice from Northwestern University in 2003, has been concerned with patterns of cyclicality and repetition.

In her concurrent solo exhibition at James Cohan (5 March–3 April 2021), the artist presents a series of white paintings on burlap sacks, deforming their original surfaces by tugging and removing threads before filling them in meticulously with white paint, revealing the potential to start anew.

Her ceramic installation on view in the gallery's virtual presentation for EXPO CHGO reveals a similar interest in pattern, its surface verging on the abstract, as the artist asks: 'How much "difference" can be introduced into a pattern field without collapsing into unreliability?'

This mixed-media work by Brenna Youngblood is being shown alongside canvases by Lenz Geerk and acrylic, ink, dye, and burlap paintings by Evan Nesbit.

Youngblood's assemblages and collages are informed by politics and ethics of representation, compiling an alternative view of urban America, in particular Los Angeles, where she lives and works.

The artist frequently incorporates found objects in her works, as seen in Abstracted Realities, her 2016 solo exhibition at the Seattle Art Museum—an approach that often aligns her work with West Coast assemblage artists such as Betye Saar and John Outterbridge, as well as the combine paintings of Robert Rauschenberg.

Youngblood was trained as a photographer, having graduated from California State University in 2002, followed by the University of California in 2006. Her early works constitute collages of fragmented photographic images, as seen in her first museum solo show at the Hammer Museum in 2006. Works like Master P (2012) represent a direct continuation of this approach, with explosive planes rendered in the layering of different materials and colour.

Since the 1990s, Los Angeles-based artist John Sonsini has invited Latino workers he encounters in the city to have their portraits painted.

Spending up to five weeks with his sitters before he does so, the resulting paintings appear with urgency, their thick and quick strokes emphasising the individuality of each person.

Sonsini's highly personal approach to portraiture is coupled with theatrical sensibility, perhaps influenced by his time working alongside Bob Mizer at the photographer's Athletic Model Guild studios, where the artist painted backdrops and scenery in the 1980s.

The artist's recent solo exhibition with Vielmetter, Cowboy Stories & New Paintings, preceded the artist's presentation for EXPO CHGO, where seven paintings focus on Gabriel Barajas, Sonsini's partner, who was Sonsini's sole model over 24 years, and who Sonsini has returned his focus during the pandemic.

The eclectic fields of Amir H. Fallah's paintings expand traditional notions of portraiture. Instead of spelling out a person's individuality, Fallah draws from Western painting vocabularies, vernacular imagery, along with details from his native Iran, including aspects from Persian miniature painting, to evoke stories of migration, celebration, and trauma.

Fallah moved to the U.S. from Iran as a boy and graduated from the Maryland Institute College of Art in 2002, followed by the University of California, Los Angeles, in 2005. Beginning his creative trajectory as a graffiti artist, Fallah shifted to painting aged 25, and has since established a style that sits between fact and fiction, embodying both collective and individual experience.

As the artist has explained, 'I'm interested in turning the history of portraiture on its head and trying to create an alternative way to describe someone. I'm interested in how objects can be charged with meaning and how people surround themselves with certain items as a way to hold onto, document, and preserve their lives'.

In 2009, the artist participated in the Sharjah Biennial, and he has exhibited in group and solo exhibitions worldwide. At EXPO CHGO, the artist's paintings are being shown alongside Daniel Gibson's dream-like paintings incorporating natural elements.

Otto Boll's sculptures appear as if they have been drawn in the air. Thin, swooping strokes of wood and steel hold their own in space, as though hovering.

As the artist explained in an interview with Axel Vervoordt Gallery on the occasion of his 2012 solo exhibition there, 'A void for me is a beginning. There is nothing and from this point, you have to start anew. And to have the feeling of the void in the back of your mind, it's just like looking for another country. It has something to do with possibility.'

Alongside his presentation at EXPO CHGO, ten sculptures by the artist will be on view in his solo exhibition at the gallery, Widening the Language (10 April–12 June 2021), demonstrating his unique approach to finding absence in materiality.

This luminous painting on reclaimed wood by Douglas Melini features in Miles McEnery Gallery's presentation centred on artists who have contributed to the development of contemporary painting.

Melini, who joined the gallery in early 2021 and will have his first solo exhibition with them in autumn 2021, received his Bachelor of Arts from Maryland, College Park in 1994, followed by a Master of Fine Arts from California Institute of the Arts in 1997.

Combining brilliant colour combinations with geometric order, Melini's works recall those of Frank Stella, while occasionally veering into more complex patterns. In 2016, for instance, Melini created a series of paintings—presented at Van Doren Waxter—that featured the pattern of his childhood bedroom's wallpaper, recalling both decorative traditions and the modernist grid.

His recent paintings on wood combine patterns from the natural world with geometric abstraction, resulting in enticing textures through their weathered surfaces.—[O] Michelle Grabner is an artist, writer, curator, and lecturer. She is known for her patterned abstract paintings, prints, and drawings, as well as her promotion of feminist and midwestern issues. Home Studio Grabner deliberately works from her 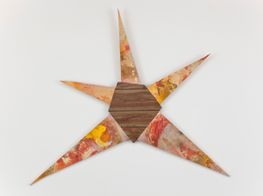 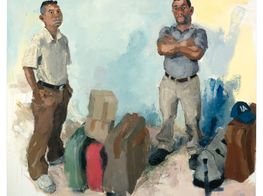 John Sonsini is a Los Angeles-based artist known for his portraits of Latino day labourers, which he has been creating since the 1990s. Working with distinctively textured brushwork, Sonsini draws attention to the often-overlooked population of Los 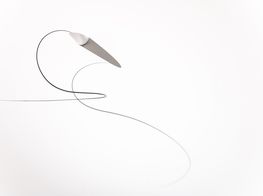 The artist is born in 1952 in Issum/Geldern. From 1975 to 1980 he studies at the department for Art education Münster at the Academy of Fine Art Dusseldorf with Professor Ernst Hermanns. In 1980 he receives the Caspar-von-Zumbusch-Award. From 1981