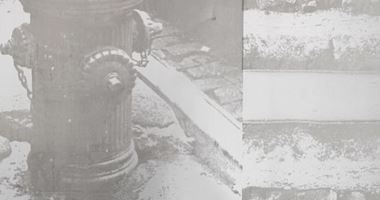 Perhaps best known for his mixed media 'Combines', Robert Rauschenberg was an influential American avant-garde painter, and multi-disciplinary artist. From the late 1950s to the early 1970s he pioneered conceptual and technical developments in painting and assemblage as well as a slew of other disciplines.

Rauschenberg was born in Port Arthur, Texas. In 1925. After studying painting in Kansas City, Paris, and North Carolina, he moved to New York in 1950—when Abstract Expressionism was in full swing but Pop art, with its celebration of everyday imagery, was soon to emerge.

Rauschenberg's interest in photography, screen-printing, and other disciplines led him to further develop ideas, stimulated by Marcel Duchamp and Kurt Schwitters, of store-purchased ready-mades, found objects, and printed media mingled with a strong sense of the materiality of paint and the spatial independence of sculpture—be that freestanding or wall relief. These works were often called 'combines'.

The idea that an artwork might be a kind of decipherable rebus was encouraged by Rauschenberg's close friendship with Jasper Johns, both artists being interested in the implications of carefully chosen attached objects, thickly applied paint, and abstraction blended with narrative elements.

A multi-disciplinary pioneer and challenger of boundaries, Robert Rauschenberg's most famous paintings and 'combines', incorporating everyday objects and imagery, were a precursor to modern American Pop Art and the 1970s Conceptual movement.

Becoming more expressive, Robert Rauschenberg's 'Black Paintings', made sporadically between 1951 and 1953 saw the artist experimenting with different textures and traditional brushstrokes, and with newspaper grounds. This further developed into Rauschenberg's 'Red Paintings' (1953–54), which were painted mostly in red paint applied onto various grounds in brushstrokes, impasto applications, drips, and directly from the tube. Into these the artist began incorporating fabrics and found objects.

From the mid-50s into the 1960s Rauschenberg began experimenting with his 'Combines' (1954–1964) works that blended the mediums of painting sculpture and found objects. The artist made free-standing and wall-based works that incorporated various discarded objects, from newspaper clippings to taxidermy, with paint and traditional paint supports.

These innovative Dada-inspired creations included works like Bed (1955), with its vertically presented paint-encrusted bed and quilt, and Monogram (1959), a stuffed billy goat thrust through an automobile tyre and standing on a platform. These 'combines' and later works by the artist that built on their initial premise, influenced later artists such as Don Driver, Jessica Stockholder, Isa Genzken, and Rachel Harrison.

Rauschenberg was also a precursor of contemporary Conceptual art. Long before the Conceptual art of the 1970s was defined, Rauschenberg made works like the self-explanatory Erased de Kooning Drawing (1953). In 1961 he presented as a work This is a Portrait of Iris Clert If I Say So (1961), a telegram the artist had sent to his dealer named in the title.

Works such as Retroactive I and Retroactive II (both 1963), part of a series of silkscreen paintings made in the early 1960s, are emblematic of Rauschenberg's first experiments with silkscreen printing and collage. A collage of everyday and pop culture images, such as a glass of water, a television still of John F Kennedy, and a NASA picture of an astronaut taken from Time Magazine, are imperfectly screen-printed on a canvas and touched up with paint. Such works have been viewed as an early prototype of Pop Art.

Rauschenberg continued to incorporate screen-printing processes into his art well into the 1990s in series like 'A Quake in Paradise (Labyrinth)' (1994)–a set of colourful acrylic screen-prints on aluminum and Lexan panels, presenting photographic imagery of divers.

Rauschenberg continued to experiment in these various mediums until his passing in 2008.

Rauschenberg received numerous awards and accolades over the course of his career for services to art and charitable work. Among these are the Award of Excellence for Artistic Contributions to the Fight Against AIDS, from the American Foundation for AIDS Research (2000); a Gold Medal for Painting from the American Academy of Arts and Letters, (1999) the Lifetime Achievement Award in Contemporary Sculpture, from the International Sculpture Center in Washington, D.C. (1996) and a National Medal of the Arts under the National Endowment for the Arts (1993).

Robert Rauschenberg's art for sale at auction can go for seven or eight figure prices. Even before the artists' passing in 2008, the combine Photograph (1959) sold for over US $10 million at Sotheby's in 2007. In 2019 Buffalo II (1964) was sold at auction at Christies for close to US $89 million, completely smashing previous records.

I remember exactly where and when I decided to write a book about the moon: lying on my back in a dentist's chair, waiting for the anaesthetic to take effect. To distract his patients, the dentist had

I'm preoccupied, at the moment, with the generosity of Robert Rauschenberg's art. This preoccupied his contemporaries, too, as John Giorno makes clear: 'The most important thing I got from Bob Rausc

Read More Related Press Too Big for a Booth? Art Basel Still Has Room for Your Art 11 June 2019, The New York Times

Be among the first to know when new artworks and exhibitions by Robert Rauschenberg are added to Ocula.
Sign Up Login