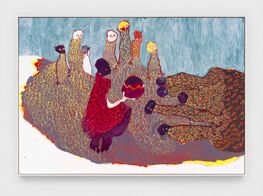 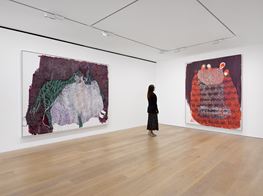 Portia Zvavahera paints from her dreams—her grandmother believed in them, she once explained; they would discuss their reveries daily growing up in Zimbabwe. Now, the artist records her nocturnal visions as sketches, which she develops into paintings where animal and human forms appear like apparitions.

Across Zvavahera's canvases, which recall the fluid, expressive landscapes of Zimbabwean modernist Thomas Mukarobgwe, figures weave their way through layered image planes composed of sweeping strokes and printed patterns using oil bar, oil-based printing ink, and a batik-informed wax-resist process. The artist developed these techniques at the BAT Visual Arts Studio where she studied between 2003 and 2005, obtaining a diploma from Harare Polytechnic College in 2006.

The veil is an ever-present motif—a symbol of life, renewal, and death, she notes, depending on its ritual usage. Sometimes it appears like printed lace, as is the case with Ndakupfeka (2014), which was included in Wayfinding, the artist's first solo exhibition in Johannesburg with Stevenson in 2014: a red body seemingly illuminated by a white spotlight over which fine blue waves are printed.

Mostly, these curtains overlap in compositions that oscillate between patterns and colour wash, creating a dynamic interplay between concealment and revelation, abstraction and figuration, flatness and depth. In This is where I travelled 2 (2020), part of a new series on view in the artist's first solo show in Europe at David Zwirner in London (15 September–31 October 2020), a body is barely discernible, save for a pair of feet emerging from a form robed in a flowing mesh of patterns, seemingly in flight.

The title of Zvavahera's London show, Ndakavata pasi ndikamutswa nekuti anonditsigira, translates from Shona to 'I took my rest in sleep and then I awoke for He sustained me'. What appears are bodies in a state of ritual suspension; caught between realms. In This is where I travelled 4 (2020), black waves repeat over a crimson block from which five heads emerge, cutting off chains of green leaves cascading down towards a dark central column.

Zvavahera has talked about dreaming as a form of healing prayer—a means to tap into a spiritual world where references intermingle.

The composition suggests a human ring—an arrangement that re-appears in works like This is where I travelled 5 (2020), with five heads circling a central form with a blue head, and in earlier works such as Vese Vakanddibata (They All Gave Me Strength) (2016), which appeared in the artist's fourth solo show with Stevenson: four heads emerging from a smoky wash from which three arms hold a central body.

Zvavahera has talked about dreaming as a form of healing prayer—a means to tap into a spiritual world where references intermingle. One 2013 work, Commitment, shows a woman standing before a white cross, while His Presence (2013) depicts bodies on their knees hailing a shadowy figure emerging from a background of diaphanous strokes.

Both paintings were included in Dudziro: Interrogating the Visions of Religious Beliefs, a group show curated by Raphael Chikukwa for the Zimbabwe Pavilion at the 55th Venice Biennale in 2013, which explored the presence of spirituality in contemporary Zimbabwe.

Later works chart evolving experiences. Zvavahera talks about not dreaming for the majority of the time she was in India for a residency at 1 Shanti Road, Bangalore, in 2018; a result, she supposes, of the stimulation of new cultural encounters.2 The one dream she did have, in which she saw her family suffering, resulted in a series centring on the bull—for the artist, an ominous sign of future challenges, though she has noted that her paintings tend to filter out negativity. 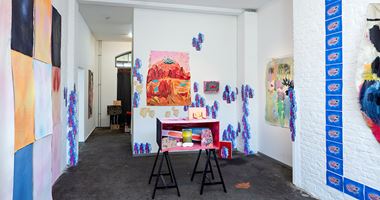 Ocula Feature10th Berlin Biennale: ‘Let’s be clear; we are at war’Read More

Reflecting on the bull's sacred position in Hindu culture, Zvavahera also found a connection with its presence in Zimbabwe as a figure of worship—all of which feeds into its manifestation on canvas as a fluid body made of many filters. 'It's like it's the same everywhere', she commented on the similarity; 'There's nothing new under the sun.'3 Hence, the title of the 2018 triptych she presented at the 10th Berlin Biennale (9 June–9 September 2018), in which a bull-headed figure holds a body in one frame, and the tail of the animal transforms into a snake in another: Hapana Chitsva, or All is Ancient.

That sense of deep timelessness is what Zvavahera's paintings convey. Each a representation of the subconscious mind's expansive depths, where temporalities merge and encounters become profound communions between worlds without, within, before, and beyond—at once specific and abstract, with images untethered from singular meanings. Having a dream, the artist says, is like looking at a painting. 'The focal point', she explains, is 'the thing that strikes you'.4 —[O]

David Zwirner is pleased to present Ndakavata pasi ndikamutswa nekuti anonditsigira, an exhibition of new paintings by the Zimbabwean artist Portia Zvavahera. The title translates from Shona to English as 'I took my rest in sleep and then I awoke