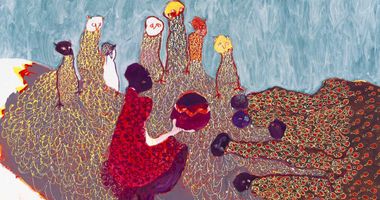 Based in Harare, Zvavahera attended the BAT Visual Arts Studio, National Gallery of Zimbabwe (2003–2005), later obtaining her Diploma in Visual Arts from Harare Polytechnic (2006). She held her solo exhibition, Under My Skin, at the National Gallery of Zimbabwe in 2010, and began to garner international acclaim for her participation in Zimbabwe's Pavilion, Dudziro: Interrogating the Visions of Religious Beliefs, curated by Raphael Chikukwa at the 55th Venice Biennale in 2013.

The fantastic, dreamlike scenes in Zvavahera's paintings are mainly inhabited by women, who appear individually or as groups engaged in communal rituals. They are inspired by the artist, members of her family, or the mysterious figures she encounters in her dreams. Zvavahera has described painting as 'a healing process', saying—in an interview with Bomb Magazine in 2015—that 'I have a cycle, I should say, because my work is all about my life experiences. I paint mostly painful moments.'

Semi-autobiographical in nature, the 'painful moments' in Zvavahera's work draw on the themes of separation, anxiety, loss, and love. In 2017, for example, the artist spent three months away from her family for her residency at Gasworks, London; from this period emerged such paintings as My Spirits with You (2017), in which a maternal figure embraces two smaller bodies in undulating clouds of yellow. This is where I travelled 1, a new work included in her solo show Ndakavata pasi ndikamutswa nekuti anonditsigira at London's David Zwirner (2020), similarly references a parent's desire to protect her child. In Zvavahera's dream that inspired the painting, the artist's parents were battling a dog that looked like a bull—considered an evil spirit in the Shona culture when it appears in dreams—for her.

Zvavahera is also known for her intricate designs of veils that derive from traditional Zimbabwean patterns. In Embraced and Protected in You (2016), the figure on the right extends her white veil over the two other reclining figures; in Cleansing (2019), delicate floral motifs engulf the lone body of a dark-haired woman, with bands of white that evoke ripples. As the artist told David Zwirner in 2020, the veil 'symbolises a new life' for her, drawing from the Zimbabwean custom of putting a veil on the dead to prepare them for the passage to the other world. This imbues her paintings with a 'sense of deep timelessness', as noted by Ocula's Stephanie Bailey in 2020, collapsing the boundaries between worlds and meanings.

View All (5)
Ocula Feature Venice Post-Mortem: Reflections on The Milk of Dreams* By Stephanie Bailey

Portia Zvavahera continues her rise to mega-gallery stardom with her debut solo exhibition in New York at David Zwirner.

Portia Zvavahera, who in 2017 participated in a three-month residency at London's Gasworks, is not the first Zimbabwean artist to experience a rollercoaster of emotions while living in the UK.

Sign up to be notified when new artworks and exhibitions by Portia Zvavahera are added to Ocula.
Sign Up Login