What's the good of this video if not to bring back to life the exhibition Alighiero Boetti. Il Mondo Fantastico, which, in turn, had re-proposed a great installation made of little plastic animals, the kind you buy at newsstands? Alighiero Boetti's ZOO was initially thought to be a game between the artist and his sons Agata and Matteo, but it soon took on the appearance, character and importance of a fortuitous and never-ending installation, as Annemarie Sauzeau Boetti writes, which was caught by chance by Giorgio Colombo's lens in the autumn of 1979. 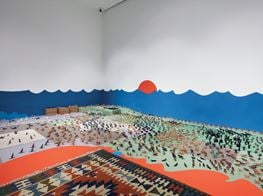 The exhibition Alighiero Boetti. The Fantastic World, in program at Milan's Dep Art Gallery from February 28 to April 28, 2018, consists of some thirty works on paper starting from 1965. The selection includes those described as those of his 'own 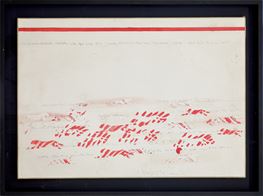 Travelling to Afghanistan at the beginning of the 1970s, he was introduced to the traditional craft of embroidery, which marked a turning point in the artist's career. In his consequent Territori Occupati series (1971-92) he commissioned Afghan