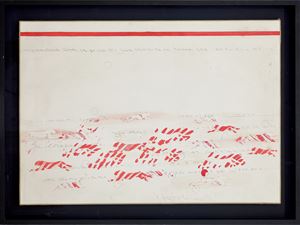 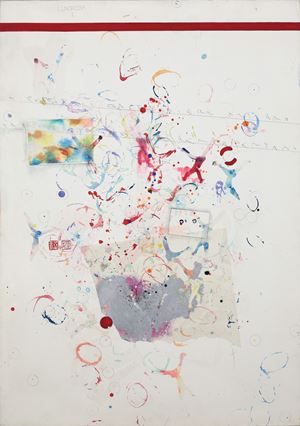 The exhibition Alighiero Boetti. The Fantastic World, in program at Milan's Dep Art Gallery from February 28 to April 28, 2018, consists of some thirty works on paper starting from 1965. The selection includes those described as those of his 'own hand' (thus, not realised with the collaboration or the entire work of others) and a large installation from 1979 that until today has never been repurposed.

The presented works exemplify that for Alighiero Boetti, marking and drawing were the equivalent to tracing a mapping of an imaginary world, completed with the most different stylistic figures, often with classifying hints of modalities and subjects, which repeat themselves and fuse together, blending, multiplying and aggregating.

These papers are more and more extensive or multiplicable. Indeed, Alighiero Boetti's papers often indicate a writing, reporting, collage or tracing prevalence; however, just as often, they reveal the dominance of painting.In fact, the works in exhibition are neither blueprints nor preparatory drawings, but present themselves as paintings to all effects. Structured, constructed and well-defined, the exhibited works reveal one of the lesser known aspects of the artist: he was an exceptional painter.

Curated by Federico Sardella, the exhibition opens with an Indian ink on paper (1965), from the artist's earliest creative period, and continues with an in-depth study dedicated to one of Boetti's favourite themes: nature revisited and the animal kingdom. From the 1970s onward, this theme occupied a significant part of the artist's attention. It strongly differentiated his production in the 1980s to the point where it characterised the period. Monkeys, panthers, dolphins, frogs, mountain goats, turtles and other creatures of the animal world take form in Boetti. Thanks to Alighiero Boetti, they are reborn, and are decorative elements that can be repeated indefinitely, and, such as numbers, they can be combined without limitations. The important Zoo installation of 1979 likewise illustrates this theme. Developed by Alighiero Boetti with his children Agata and Matteo, Zoo has been installed only once, in the artist's Rome studio. It has often been published but never repurposed until today. It was documented at time in Giorgio Colombo's photographs, and the installation—a type of assembly of animals to which the artist and his two children dedicated several months to construct—is now revived and adapted to the gallery's space. One can sit on an Afghan rug and observe the animals from above, which inevitably shifts the point of view of the work and role of the spectator in its completeness. This installation employs the same plastic subjects used by Alighiero Boetti and his children. These objects are arranged according to the classical Boetti concept of grouping by genus, while animal placement is aimed also at noting their geographical background. Indeed, the artist himself wrote: 'These animals carry within them the memory of millions of their predecessors and remember time. An ancient time: slow, anonymous, identical, immobile, unchanged.'

Another section of the exhibition is dedicated to unusual or particularly rare subjects, frequently in black and white, or in any case not coloured, drawings with graphite, ink, watercolour or ballpoint pen. All the works shown are completed on paper. One example is Lampada (1965), attributable to the artist's Turin period.

The exhibited is accompanied by a bilingual volume (Italian-English) realised by Dep Art, containing an introduction by Antonio Addamiano and Federico Sardella, a text by the curator which is a soliloquy about 'Alighiero e Boetti' (the artist's 'twins' concept), the reproduction of all the exhibited works, a selection of repertoire images and an updated biographical note. 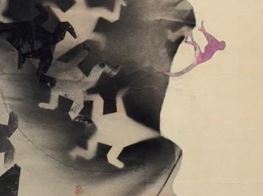 What's the good of this video if not to bring back to life the exhibition Alighiero Boetti. Il Mondo Fantastico, which, in turn, had re-proposed a great installation made of little plastic animals, the kind you buy at newsstands? Alighiero Boetti's ZOO was initially thought to be a game between the artist and his sons Agata and Matteo, but it...

Sign up to be among the first to know when new exhibitions by Alighiero Boetti or at Dep Art Gallery open.